After sustaining an injury early in the 2018-19 season it is official that Nic Kerdiles is done for the season. 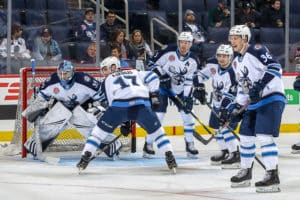 The Jets traded with the Ducks this past summer sending their 2014 4th rounder (Chase De Leo) to Anaheim for Nic Kerdiles (2012 2nd rounder).  At the time of the trade it seemed like an opportunity to give each player a chance in a new system.  For Winnipeg they were getting a player who had played two NHL games for the Ducks the previous season while Anaheim was getting a California kid from nearby La Mirada, California (20 minute drive to Anaheim, 1.5 hrs to San Diego) who has been a solid AHL player since he turned pro.

It has been a season to forget here in Manitoba for Nic Kerdiles as he has played in just three games for the Moose finishing with one assist.  He has remained out of the lineup with a number of health related issues since an October 13th game against Belleville here in Winnipeg.  Unfortunately for the fifth year pro I’ve been told that he is done for the season.

Injury News: Jets prospect/Moose forward C.J. Suess is done for the season
Manitoba Moose run has taken them from last in AHL to a playoff spot