Taking a look at the East, it appears that the guys powers of prognostication were pretty, pretty, pretty good in some of the series.  Ez appears to be an all or none type of picker.  He got punted from 2 series but also picked the right # of games in 2 others.  The other 3 guys went 4/4 and each was able to accurately predict 1 series length. 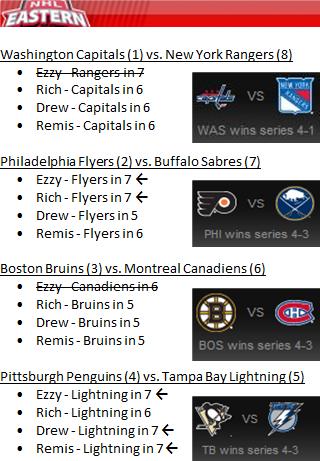 Over in the West, the guy’s picking percentage went down as everyone but Ez (2/4) went 3/4.  Remis showed that he was the King of Prognostication as he correctly predicted a Wings sweep of the Yotes and a Sharks victory in 6 over the Kings. 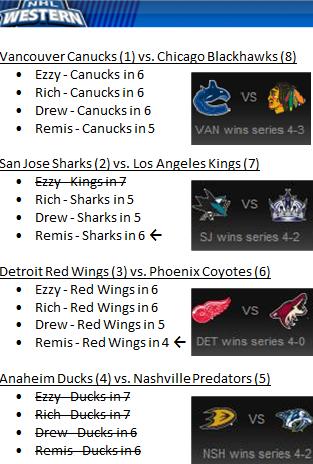 What have we learned?  We’ve learned that if you ever want playoff tips, don’t listen to Ez as he went 4/8 in the 1st Round.  The other 3 showed some adeptness, going 7/8.  Remis accurately called the most series length (3/8), with Ez going 2/8 and both Rich and Drew just 1/8.

Tune into the Illegal Curve Radio show every Saturday from 9am cst to 12 pm cst on Sports Radio 1290, when Rich, Drew, Ez and Remis delve into all the action from around the NHL.  And if you miss the show, worry not as you can subscribe to the Show via iTunes or for Non-iTunes users, you can subscribe via RSS.