Game 7 of the pre-season: Jets vs. Wild projected lines

Lineups and pre-game audio in advance of this afternoon’s game. 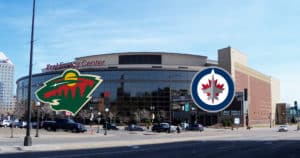 While the Jets received good news last night that Kyle Connor signed a seven-year contract, he won’t be available for today’s matinee in St. Paul as he is not expected to join his teammates on the ice until Tuesday as the team prepares for the regular season opener next Thursday in New York.

There won’t be a morning skate so the lines and D pairs are based on yesterday’s practice lines and D pairs from the IcePlex.  Based on the game roster tweeted by Jets PR neither Nelson Nogier or Dmitry Kulikov will be playing so for now Ville Heinola and Tucker Poolman have been paired together.   We also know that Jets coach Paul Maurice plans on playing both Connor Hellebuyck and Laurent Brossoit in net.

Updated as Mark Scheifele who was on the roster isn’t playing according to Scott Billeck of the Winnipeg Sun so David Gustafsson gets moved to the top line centre spot and Joona Luoto comes onto the 4th line.

Puck drop is at 1:00 pm CDT.  Be sure to head over to illegalcurve.com following the game for a recap of the action which includes post-game audio from the Jets room as well as from coach Maurice.