Note:  It didn’t seem like it was going to be a particularly newsworthy Jets day on Saturday aside from Day 16 chatter as the team got ready for their afternoon matinee today in St. Paul against the Wild but late evening news indicated, which the team later confirmed, that the Jets had agreed to terms with Kyle Connor on a new seven year deal.

Note II:  As mentioned above today the Jets play the Wild in their final pre-season game.  No morning skate with today’s 1 pm puck drop but be sure to check out our pre-game report with the projected lines, D pairs and pre-game audio.  Following the game we will have our usual post-game coverage on site.

Note III:  The Moose earned themselves a weekend split against the Wild after yesterday afternoon’s 3-1 win over Iowa.  Andrei Chibisov made an impact tying the game and then Michael Spacek got the game winner on a nice pass by Seth Griffith.  The team continues their training camp as they get ready for their opening game of the 2019-20 season on Friday, October 4th against the Rampage in San Antonio. 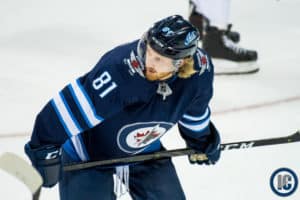 Winnipeg Sun:  Laine signing brings joy to Jets.  Now that the team no longer has to answer questions about missing RFAs (note the plural) we should have much more joy in Joyland.

Winnipeg Free Press:  Connor, Jets agree on 7-year $50-M deal.  (Paywall).  Jason (who joined us on yesterday’s IC Hockey Show, see below) wrote about the deal that everyone in Winnipeg was talking about on Saturday night.

Winnipeg Free Press:  Laine expected to be a ‘go’ in opener.  (Paywall).  Sounds like Kyle Connor will be on the same schedule.

The Athletic Winnipeg:  What Kyle Connor’s 7-year contract means to the Jets’ short- and long-term outlook.  (Paywall).  Murat gives you insight into this deal across the board.

TSN:  McLennan on Jets signing Laine, Connor: Cheveldayoff did a ‘fantastic job’.  It was always going to be a tough summer for the Jets as they negotiated with Patrik Laine and Kyle Connor. Even though signing both happened a lot later than he would have wanted, how did Kevin Cheveldayoff fare with his deals? Jamie McLennan shares his thoughts and offers his take on which GM had the best summer when it came to inking RFAs.