Training camp roster down to one ice time. 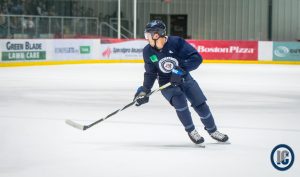 It looks like Sami Niku continues to be in the first phase of returning from a groin issue  as according to Scott Billeck of the Winnipeg Sun he was on the ice skating by himself.  Here are your lines and D pairs according to Scott:

Coach Maurice:  Thoughts on the Patrik Laine contract getting done.  What’s Laine’s timeline?  Does he expect to have Laine in the lineup for opening night?  Does he have any concern that Laine is behind due to the intensity of training camp?  Whether players not being in the room changes the mood of the room?  On lineup creation.  What are his expectations for Laine this season?  What does he want to see tomorrow?  Is it a tryout again for David Gustafsson?  On Letestu eating mustard.  What is the oddest thing he’s seen a player eating on the bench?

Maurice said he expects Laine to go through physicals on Monday and be on the ice with the team on Tuesday.

Jets have an afternoon matinee with the Minnesota Wild tomorrow in St. Paul which will wrap up the exhibition games. Puck drop is at 1 pm. Get your morning started with the Jets Papers at 7 am.