Drama in the Desert & Dixie: Pizza battle over support for the Jets, Nashville example of small market that works,

Arizona Republic:  Two year battle for Phoenix Coyotes drags on in Glendale. And on and on and on.  But on the bright side, this should be over in two weeks or so…..

TSN:  City of Glendale has paid NHL.  Don’t see how they had any other option and as per Darren Dreger’s tweet (see below), the bill was apparently paid yesterday.  Next move in this chess match to Goldwater.

Columbus Dispatch:  Relocation is a murky business in NHL circles.  Seems like the tire kicking is too little too late to save one of these troubled franchises.

Winnipeg Free Press:  Ready to play, decisions been made.   While I agree with Campbell that the decision has already been made, so the report may be somewhat irrelevant, with some of the anti-Winnipeg articles and statements still being made, it may be required as further proof that the NHL can work in Winnipeg.

Toronto Star:  Predators survive and soar in ‘Smashville’.  Fear not.  We aren’t including this link because there is cause for concern in the Music City.  Cox talks about Nashville as an example of how hockey  can work in a smaller market.

Winnipeg Sun:  There’ll be free pizza if NHL returns.  In an effort to counter the recent publicity that the owner of Domino’s garnered with his full page ad, Boston Pizza offers up free pizza.

Arizona Republic:  Loss of Coyotes would negatively impact all. Looks like the Mayor of Scottsdale won’t be invited to the next Arizona Mayors party. 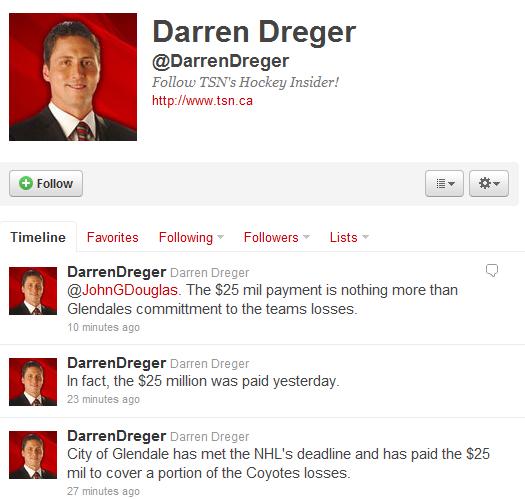