Drama in the Desert & Dixie: Former Jets star says players will come to Winnipeg, NHL team in Peg would be good for business

TSN:  Dreger Report (item #4).  So far there hasn’t been much in the way of enlightening news.

Forbes:  Atlanta Thrashers will likely be sold for 110 million.   Sounds a lot better than 170-210 million the NHL reportedly wants for the Coyotes.

Winnipeg Sun:  NHL team in Peg would be good for business.  It would certainly help to bring 15,000 people downtown 3 to 4 times a week during the NHL season.  Of course if I lose my standing reservation at Earls Main on Wednesday, then I’d prefer for a new NHL team to play at the Ice Plex west of the city.

“There are enough that want to win, and those are the ones you should target,” he said. “Players who think it’s not good here shouldn’t play here.” 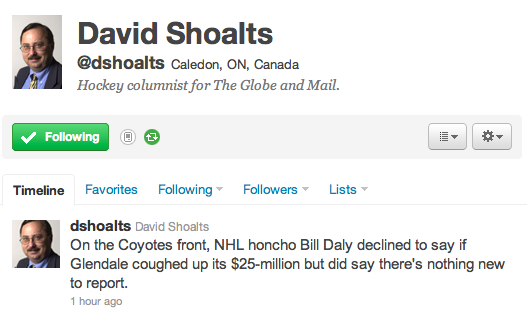