Drama in the Desert & Dixie: Winnipeg journalists battle it out, Does support of AHL’s Moose reflect future NHL support?

Council of Glendale (page 3, item 2a):  Coyotes added to the agenda for May 3rd meeting.  You would think that the COG and its attorney know the position of the COG regarding the Phoenix Coyotes.

Winnipeg Sun: Fans aren’t Bettman’s bosses, so support the team we have.   Bruce Dowbiggin of the Globe and Mail last week seemed to suggest that a loss of either the Phoenix or Atlanta market wouldn’t adversely affect the TV contract.

Team 1200 (Audio):  Scott Taylor joins Team 1200 to talk poor journalism.  Scott sounds like he has a personal axe to grind with Lawless. 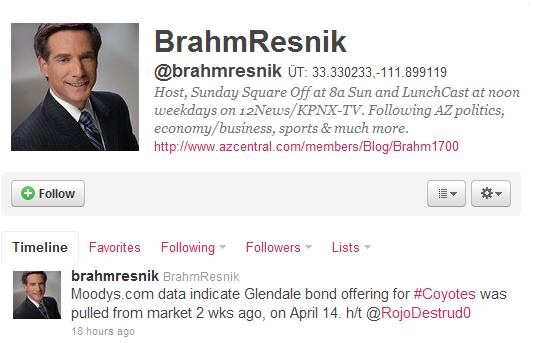 Teams in Trouble: Coyotes might want to whiteout the balance sheet, Will Winnipeg be left at the alter by NHL?
Drama in the Desert & Dixie: Former Jets star says players will come to Winnipeg, NHL team in Peg would be good for business