Drama in the Desert: An Open Letter to the Residents of the Greater Phoenix Area

David’s Note:  Ironically as a big fan of the Wings, I could have written this letter but it was submitted to IC by a frequent reader from the United States.  Enjoy.

As we all know, there is a chance, some would say better than 50/50, that the Phoenix Coyotes will be calling Winnipeg home starting next season.  As I write this, the Coyotes prepare to face the Detroit Red Wings in game three of the Western Conference quarter-finals and what may be the second-to-last NHL game in the desert for quite a long time if ever.  In the interest of full disclosure, it should be noted that I am a Detroit fan and have been since around 1994.  However, I really have nothing against the Coyotes as an organization and I honestly have come to respect them quite a bit for what the team has done the past two seasons given the circumstances.  Though I would love to see Detroit win this series this piece has nothing to do with my personal loyalties and I have no desire to see the Coyotes leave Glendale.

My main message to Phoenix area residents right now is this: act like you care for the rest of the playoffs at least.  While it may very well already be a forgone conclusion that the ‘Yotes will be in another location next year (honestly nobody knows for sure), remember that the city to which your team may return would be getting it back in part because they showed the league that there is passion for hockey in Winnipeg starting before it was even announced that the Jets would be packing up and heading to the desert during the 1995-96 season.  Even if it takes a while, don’t let yourselves be passed over for consideration if the NHL’s grand plan of expansion in the western United States comes to fruition because you made a poor showing with your team on the chopping block.

Also, don’t let yourselves be lulled into a sense that no matter what happens, the Coyotes will ultimately stay in Glendale due to market concerns.  Some mainstream media members have said that hockey cannot work in Winnipeg, and thus your team would not be moved there, because nothing about the city has changed in the past 15 years.  I have never been to Winnipeg and I am not a financial expert but I do believe that these reporters commit a fallacy with their statement.  The city may or may not have changed but the fact is that the NHL itself has.  The salary cap and revenue sharing brought on by the new CBA now allow teams to exist in small markets.  This was not the case in the mid-1990’s when a team in a large market with a big war chest could essentially buy a Cup run leaving small market teams without such resources in the cold.  Winnipeg can work and the NHL either already knows it or will find out if/when the test season ticket drive occurs.

To be honest, we’re all tired of hearing about how a certain conservative group has ruined everything for the Coyotes.  I’m no expert on Arizona constitutional law so I’ll not offer an opinion one way or another on the merits for anyone’s argument in the whole municipal bond fiasco but perhaps allow me to submit a couple of points.

First, that the Goldwater Institute never would have gotten involved in the first place if fans had actually shown up to the games instead of making Saturday night games in Jobing.com Arena look like a Wednesday matinee game in Detroit or Chicago in terms of attendance, thereby making it possible to find an owner willing to sink his or her own money into the franchise without taxpayer money.  We believe you that there are die-hard Coyotes fans in the desert but my eyes aren’t deceiving me when a full third of the arena looks empty.   I know I’m not alone in my assessment when one of your bloggers begs opposing fans to wear white in order to mask an attendance problem.  What is this, North Korea in the World Cup?

Second, Arizonans are entitled to make whatever signs and statements they want just like everyone else but if you intend to make signs blasting GWI, maybe make some asking why your neighbors aren’t filling the empty seats in front, behind, and to the left and right of you.  After all, I haven’t heard any stories of Goldwater operatives being arrested for standing by the Jobing.com Arena ticket office holding blunt objects and intimidating fans not to purchase tickets. 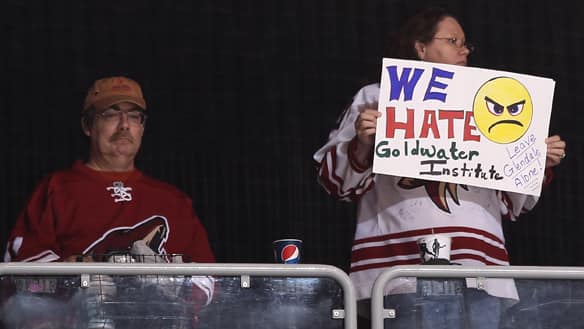 Blaming ownership doesn’t help either.  You don’t go to games for the owners; you go for the team and the sport.  If you had bought season tickets for multiple years and the team moved midway through your plan, you would be refunded for the games you didn’t get to see.  If it’s too much of a commitment to buy them for 41 games then buy a single game ticket.  There are, on average, almost 6,000 of them available each night and they’re pretty darn cheap as NHL tickets go.  Basically, the whole situation is messed up for a variety of reasons and has been for years, but Phoenix area residents could have made it a lot easier to work out if more people had bought even single game tickets and, in doing so, made the team profitable in any of the last fifteen seasons.  Bottom line: stop making excuses and go to the games.  Maybe you’ll even end up liking this hockey thing after all.

I may be a fan of the Detroit Red Wings, but I am also a fan of hockey in the United States in general.  To paraphrase the final call for the Jets on that April night in 1996, thanks for the memories Coyotes.  You will be missed, by some people at least.

Drama in the Desert: ESPN’s Pierre LeBrun talks about options other than Hulsizer which can save Yotes, Coyotes focus on Datsyuk not Peg, Deja Vous for Coyotes & fans.
Drama in the Desert: CBC’s Elliote Friedman says team in Winnipeg is inevitable, Yotes fans bracing for worst, Where is Matthew Hulsizer?