Drama in the Desert: CBC’s Elliote Friedman says team in Winnipeg is inevitable, Yotes fans bracing for worst, Where is Matthew Hulsizer?

Phoenix Business Journal:  Goldwater group says “no financial powerplay from Opposition groups”.  As AllyK wrote in the comments section (Open Letter to Greater Phx Area fans), isn’t it time to stop blaming the GWI?  If the people who were so concerned with GWI put as much effort in recruiting their friends, they could have made something of the Coyotes.

Globe & Mail:  NHL set to announce $2-billion TV deal.  This is more bad news/good news for the league.  Great news that they have signed a lucrative TV deal but bad in the sense that it was one of the main leverage points about losing US based franchises.

The anticipated loss of one or two U.S. franchises to Canada does not appear to have been an impediment to the contract.

Examiner:  Coyotes’ rumored move to Winnipeg bodes well for keeping Thrashers in Atlanta.  If you’re a fan of the Thrashers, the Coyotes’ loss will be your gain (at least temporarily).

Winnipeg Sun:  Silence of the lames.  You will always have naysayers with any endeavor. I would suggest that most in the city are done with dreaming and are ready for something tangible.

Winnipeg Free Press:  Jets Shenkarow ready to trade tears of sadness for joy.  Interesting to hear what the former owner of the Winnipeg Jets has to say about the topic of NHL hockey returning to Winnipeg. 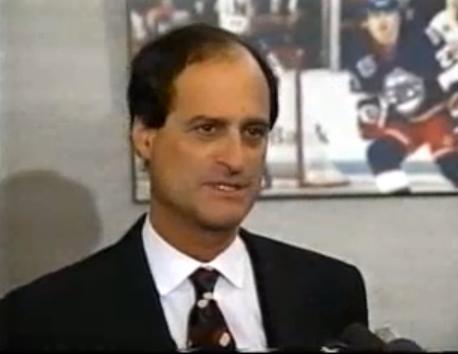 Arizona Republic:  Coyotes fans bracing for the worst.  I’m not sure what is worse.  Knowing your team is leaving, or basically knowing that your team is leaving.  Probably the latter.  Venom  directed at the Peg’ is understood, not appreciated but understood.  It’s probably better served directing it at prospective owner, Matthew Hulsizer, who hasn’t shown up to a playoff game yet.

NBC Sports:  Wings put Coyotes on the brink, will history be repeated?  Overcoming a 3 games to 0 deficit in a best of 7 series is almost unheard of in professional sports.  It has only been done a few times (1945 Leafs, 1975 Islanders and 2010 Flyers) and the Yotes would have to do it with a rested Zetterberg in the lineup.  I think it’s  a safe bet that the 3 teams listed above aren’t going to be joined by the Coyotes this season.

Winnipeg Sun:  Defiance, denial mark Coyotes mark Coyotes final stand.  But in the end it was all too little too late to stop the Wings sans Zetterberg.  This script, unlike in 96′ doesn’t appear to have the makings of a 6 game series.  So far the only parallel between 1996 and 2011 is that the winning team for games 1-3 scored four goals in victory.

CBC:  Elliote Friedman’s 30 Thoughts.  While I’d like to bite back my quick retort that I’m not so sure “everything” was done to the same degree in 1996 that is being done in 2011 (although in NHL’s defence, NHL hockey wouldn’t work without a  cap and dollar at par as well as a number of other factors, like the team owning the arena).  It would appear that media are removing the cautionary tone about a return of Winnipeg and fully embracing the possibility.


29. Winnipeg: It’s going to happen eventually, just a matter of when. Would anyone be surprised if the Coyotes moved after their season? No. But, even if that team is somehow saved, there will be other options. I do understand it is agonizing for the fans, but realize that every possibility will be given to keep teams in their current cities. W’ÿd expect nothing less if it involved a Canadian city.

Puck Daddy:  Phoenix fans don’t want to see their Coyotes jet.  Almost inevitably the ones who suffer the most are the fans.

ESPN Insider (registration required):  Observations from last night.  Seems sacrilegious to think of eliminating the Whiteout but perhaps it is time to adopt new traditions.  Thoughts?

Winnipeg Free Press:  A few Jets questions.  While we’re strolling down memory lane, does anyone remember the older lady who used to sit in section 30 (we were in section 29 row 4 so I always had a clear view of her) that was always swinging the Referee doll with a noose around it’s neck? 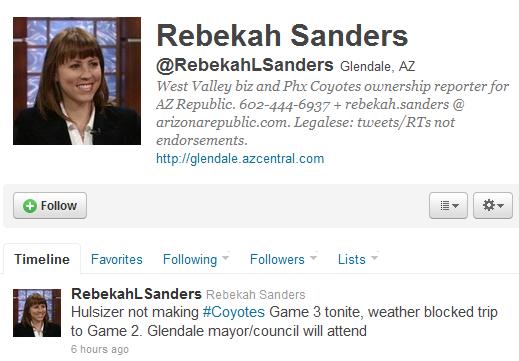 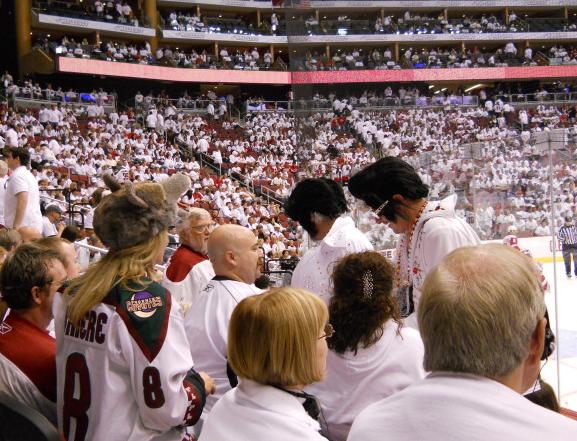 Even Elvis knows when to leave the building. Photo courtesy of AllyK00

Drama in the Desert: An Open Letter to the Residents of the Greater Phoenix Area
Drama in the Desert: Goldwater Institute and Glendale Mayor to meet on Thursday, Hulsizer camp remains committed to Coyotes, TV market could prevent Yotes move to Winnipeg