The February 27, 2012 trade deadline may be a little less than two months away, but it is important to note that last season team’s that acted early in their pursuit of key assets. Let’s take a look at the current Jets defensemen and see who fits the profile of a player who is likely to be traded.

After reading Elliotte Friedman’s 30 thoughts last week (which are always a good read), he touched on a number of topics, mainly the Coyotes and the Winter Classic. However, there was one paragraph in there that got me thinking.

“You guys love trade talk, so here’s some: If you’ve got defencemen to trade, you are in position A. NHL general managers may sell their children for blue-line depth. One defenceman who appears to be available and will command interest is Carolina’s Tim Gleason.

Anyone who has watched the Jets so far this season, is aware that one of the reasons they have had so much success is their blueline depth.

The February 27, 2012 trade deadline may be a little less than two months away, but it is important to note that  last season team’s that acted early in their pursuit of key assets. 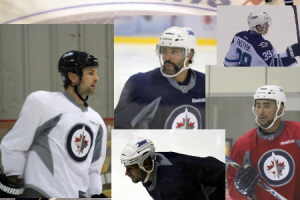 While the Jets have been tight lipped with respect to trade rumors, there are few things more interesting than trade speculation.

Let’s take a look at the current Jets defensemen and see who fits the profile of a player who is likely to be traded. (All salary and cap numbers according to CapGeek)

At the start of the year, fans were calling for Buff to be thrown out of town. His playing style was described as “roving” rather than defense. While he may be better suited as a power forward than a defenseman, he has settled down recently. His size and shot give the Jets a blue line presence that cannot be duplicated by many players around the league. His contract makes him unlikely to be traded unless it would be for another teams overpriced star.

While the Jets depth on defense limited the impact his injury could have had on the team, upon his return it was evident how much of an upgrade Enstrom brought to the lineup. The 27 year old is entering the prime of his career and is a player management should be trying to lock up for long term as he is a UFA after next season.

The 21 year old is having a breakout season; GM Kevin Cheveldayoff stated many times in the preseason how much he enjoys Bogosian’s game. Under team control for the next several seasons, it’s safe to say he’ll be around for a while

Hainsey has been solid on the blue line playing significant minutes, including minutes on  the penalty kill and occasionally on the power play. The 30-year-old veteran would fit in quite well as a depth defenseman on a playoff contender. Some teams may be deterred by his limited no trade clause and high cap hit; he is a more likely candidate to be traded at next year’s trade deadline than this year’s. On the Illegal Curve Hockey Show, Richard Pollock has been saying the Conneticut native would be a great fit on the New York Rangers.

Likeliness of a trade: Moderate

Acquired last season by Atlanta at the trade deadline, Stuart has been a defensive force for the Jets this season. A leader in the locker room, Stuart plays like he is the toughest player on the ice, dropping hits, getting in fights and ranking among league leaders in blocked shots. With the Jets defenseman decimated by injuries, Stuart demonstrated he can step up into a larger role. He receives a reasonable salary over the next two seasons which makes him attractive to other teams, but is also a reason why the cap conscious Jets would want to keep him. Stuart plays a style that is fit for playoff hockey and would look nice on the back end of a playoff roster.

Likeliness of a trade: Moderate

After a dreadful first few games which caused Coach Noel to coin the term “free pizza”, Oduya has picked up his play recently. The 30-year-old Swede has played on the power play and the penalty kill and again, would be a nice fit on the back end of a team heading to the playoffs. While his large salary may be a deterrent, the team picking him up would have it pro-rated for the remainder of the season. As a UFA next season the team acquiring him would not be forced to keep him.

Likeliness of a trade: High