The Winnipeg Jets will look to wrap up a four-game road trip with a win tonight against the reigning Stanley Cup Champion Boston Bruins. 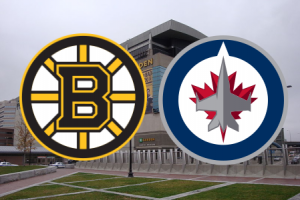 The Story: The Winnipeg Jets will look to wrap up a four-game road trip with a win tonight against the reigning Stanley Cup Champion Boston Bruins.

The Bruins aren’t in a very good mood these days. In fact, you could say that the Bruins are on fire and we don’t mean that in the winning sense. The Bruins lost their last game to the Vancouver Canucks 4-3 on Saturday night in a rematch of the 2011 Stanley Cup Finals which would normally be enough to have them enraged but it was an incident that happened during the game and the fallout afterwards that has the team really perturbed.

Bruins forward Brad Marchand was ejected from Saturday’s game late in the second period after he was called for a clipping penalty on Canucks defenseman Sami Salo, a hit that forced Salo to leave the game. On Monday, Senior Vice President of Player Safety and Hockey Operations Brendan Shanahan suspended Marchand for five games, a harsh penalty that factored in the concussion that Salo apparently suffered on the hit. The clip on Salo and the resulting suspension has set off a fire of its own in the hockey world with some saying the suspension was too harsh and some saying that Marchand should have received a lengthier suspension.

Fast forward to tonight’s game and it will be business as usual for the Jets who will have to prepare for a team that is one of the most talented in the National Hockey League even without Brad Marchand. The Jets have fared well against the Bruins in two head-to-head contests this season, earning a split. The Jets lost 4-2 in Boston in late November but then defeated the Bruins 10 days later in Winnipeg in early December which at the time handed the Bruins their first regulation loss in over a month. The game was also significant because it took place at the beginning of an ultra-successful month in which the Jets won 10 of 14 games, which vaulted the team back into the Eastern Conference playoff race.

The Jets are coming off a gritty 2-1 overtime victory against the Buffalo Sabres on Saturday night, a strong rebound game that at least temporarily erased the memory of two lopsided losses to the Montreal Canadiens (7-3) and Toronto Maple Leafs (4-0) that preceded it. Johnny Oduya scored the winning goal less than a minute in to the extra frame on a beautiful top-corner wrist shot in what was arguably the biggest goal of the year thus far on the road (apologies to Evaner Kane’s OT goal against Florida in late-October).

There will be at least one line-up change for the Jets tonight.  Tim Stapleton will return to action tonight after dealing with the flu. Alexander Burmistrov will be a game-time decision.  Stay tuned to Illegal Curve and we will let you know of any line-up changes prior to tonight’s game.

Ondrej Pavelec is expected to get the start in goal tonight for the Jets.