As the Jets hit the midway point in the season, we take a look back at how the Thrashers were doing at this point in the 2010/11 season. 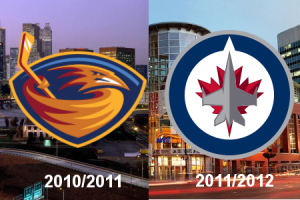 It has been a whirlwind 8 months for NHL hockey fans here in Manitoba.  With the excitement of the NHL returning to Manitoba for the first time in 15+ years and the success of the season ticket drive we actually forgot that this Jets/old Thrashers team was still a young squad in development.  IC made pre-season predictions for both why the Jets would and would not make the post-season this year.

If you will recall the 2010/11 Thrashers were a surprise story of the NHL first half last season as they were competing in the Eastern Conference but faltered down the stretch and finished out of the post season.

But how do the Jets 2.0 compare?  While the December they just had was the best in franchise history was it enough to separate these new Jets from their predecessor Thrashers?

Interestingly the Jets and Thrashers have almost identical records after 41 games.

From game 42 to 61 the Thrashers went 5-11-4 and essentially fell out of the playoff hunt.  So what does this mean?  Are the Jets destined to falter in the same manner that Atlanta did last season?  How do the 2011/12 Jets to the 2010/11 compare to the Thrashers in other areas?

Taking a look at some other statistical categories you can see below that the Jets don’t give up as many shots as they did last season.  While their PP isn’t as effective they do have a better PK than the Thrashers.

Big Buff was well ahead of this season’s current points co-leaders Blake Wheeler and Evander Kane in terms of points.  Interestingly, according to Bill Tiller from the Atlanta Journal Constitution who wrote an article last year from which I was able to get the Thrashers first 1/2 season stats, both Andrew Ladd and Tobias Enstrom had 31 points at this point last year.

How does the Jets #1 tender fare against himself one year later?  He sure has played a lot more hockey this season.  His save percentage, while quite high during his first 25 games last season, cooled off during the 2nd half of the 2010/11 season and finished at .914% in 58 total games.

What does this mean?  While each season is unique and players will say what happened in the past remains in the past, it is interesting to note the improvements and lack thereof from last season to the present.  Will the Jets finish the 2nd half in a similar manner to the Thrashers?  That is entirely within their control but it will be interesting to see how this team plays during the run up to the February 27th trade deadline (23 more games).

What stats, if any, jump out at you?  Let us know your mid-season grades.