Another pair of old time Jets heading to the team Hall of Fame.

Two of the most recognizable members of the Jets 1.0 will be added to the team Hall of Fame as the Jets 2.0 announced today that they will induct Randy Carlyle and Thomas Steen ahead of the game against the New York Rangers on February 11, 2020 (Alumni Night).

For folks who were fans of the Jets 1.0 in the 80s these two were key players. 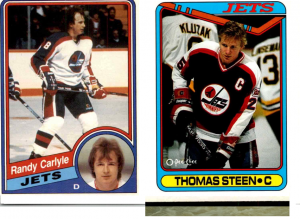 Carlyle was traded to Winnipeg from Pittsburgh in 1983-84 in exchanged for a 1st round pick in 1984 (9th overall Doug Bodger) and future considerations (Moe Mantha).  He would spend the next nine seasons patrolling the blueline (helmetless) inside Winnipeg Arena for the Jets.  His last season in the NHL was 1992-93 after which he joined the Jets coaching staff as an assistant for the final year of the Jets 1.o in Winnipeg before he became an assistant coach of the Manitoba Moose of the IHL, taking over as head coach of the Moose later that season and it was a position he would hold until 2000-01.  He made the jump to the NHL which included winning a Stanley Cup as the bench boss for Anaheim back in 2006-07.

Steen was a 5th round draft pick of Winnipeg in 1979 out of Sweden.    He would spend his entire 14 year career in the NHL, which began in 1981-82, wearing a Jets uniform which saw him produce 264 goal and 553 assists for 817 points in 950 games.  From the Jets “He had the most assists, games played and playoff games in Jets 1.0 history and the second-most goals, points, playoff assists, and playoff points.” Not too shabby.  After he spent some time in local politics here in Winnipeg he has a role with the Moose as a scout.