Note: The Jets will touch down in Regina later today as they prepare for the 2019 Heritage Classic game against the Calgary Flames which takes place on Saturday night.  It should be a fun couple of days in Saskatchewan. The Jets will practice today at 4 pm (5 pm here) at Mosaic Stadium so stay tuned for a late Friday afternoon Practice Report.

Note II:  The Moose are looking to erase the stink of four straight losses at home as they are on the road for a pair of games starting tonight in Grand Rapids against the Griffins.  Puck drop is at 6 pm CDT.

Sportsnet:  Jets struggling to rediscover contender identity with gutted blue line.  Is anyone else already sick of the word ‘identity’ yet?

CBC:  Regina brewpub cooks up Winnipeg Jets burger for NHL Heritage Classic.  While there hasn’t been a tremendous amount of interest in Manitoba about this game it is pretty clear the locals one province over are pumped up.

Winnipeg Sun:  Jets looking forward to special night in Regina.  It should be quite the evening in Regina.  Will the crowd be wearing Blue, Red or Green?

The Athletic Winnipeg: How Winnipeg developed its 2019 Heritage jersey.  (Paywall).  Murat looks in-depth at the construction of this uniform that the fan base appears to love.

The Athletic Winnipeg:  Jets’ defence and special teams remain a work in progress: 4 observations from the homestand.  (Paywall).  It wasn’t the prettiest of home stands and Ken looks back including four observations: 1) Stellar netminding with a side of saltiness. 2) Going to the nuclear option early. 3) Defence still in flux. 4) Special teams slumber. 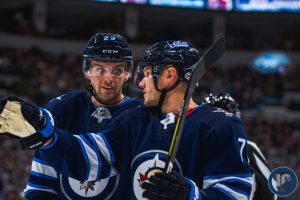 Winnipeg Free Press: Playing outside, thinking inside. (Paywall).   Mike gets you set for the action.

Winnipeg Free Press: Regina ready for a Classic. (Paywall).  It is pretty clear that the folks west of us here in Manitoba are ready to embrace this NHL event.

Regina Leader-Post:  Josh Morrissey expects to feel right at home in Riderville.  Who knew Josh Morrissey bleeds green?  But as with most everything Morrissey handles it diplomatically.

Illegal Curve:  Teemu Selanne signing his new book ‘My Life’ at Chapters in Winnipeg on Sunday.  If you’d like a chance to meet the Finnish Flash he’ll be in the city signing copies of his new book.