After a day off on Thursday the Jets hit the ice today in Regina in advance of tomorrow’s Heritage Classic. 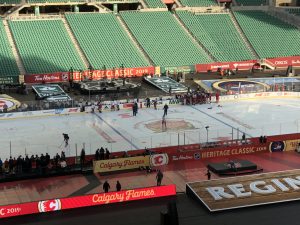 The Jets didn’t skate on Thursday choosing instead to conserve their energy as they get set to play some road games away from the province of Manitoba.  The game tomorrow night in Regina will be a home game for Winnipeg followed by road games in California and Nevada.

The Jets hit the ice after a bit of a delay in Regina.  According to Ken Wiebe of The Athletic Winnipeg below are the line rushes and D pairs.

Ken also notes that Mason Appleton is wearing a walking boot and is in crutches.  For more on the third year pro who is expected to miss a month (or more) with a broken bone in his foot click here.

Paul Maurice on tomorrow’s weather conditions, what this game means to Saskatchewan and more.

The Jets will take on the Flames tomorrow in the Heritage Classic in Regina.  Be sure to keep it locked to illegalcurve.com for the AM Papers which go live at 7 AM and then you can tune in for three hours of the Illegal Curve Hockey Show on TSN 1290 Winnipeg.