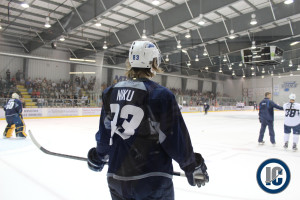 The Jets have signed their smooth skating prospect defenceman to a three year entry level contract.

The Winnipeg Jets announced they have agreed to terms with defenceman Sami Niku on a three-year entry-level contract with an annual value of $916,700.

Niku, 20, played his third season with JYP of Liiga in Finland during the 2016-17 season, posting 27 points (5G, 22A) in 59 games. He also had six points (1G, 5A) in 15 playoff games. He averaged a team-leading 19:47 TOI during the regular season and 20:32 TOI during the playoffs in helping JYP win the bronze medal. Niku was tied for the team lead during the regular season with three game-winning goals and tied for third on the team with 201 shots. During the past three seasons, he had 39 points (9G, 30A) in 109 games with JYP.

Niku was drafted by the Jets in the seventh round (198th overall) of the 2015 NHL Draft. He’s the fourth Jets selection from the 2015 NHL Draft to sign an NHL entry-level contract, joining forwards Kyle Connor, Jack Roslovic and Jansen Harkins.