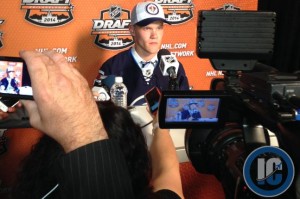 While many Jets fans remain focused on the current team it is difficult to not also find yourself checking out the kids as pundits across the nation talk about the wealth of prospects in the Jets cupboard.  The one garnering the most attention these days is 2014 1st round pick Nik Ehlers who set a Halifax Mooseheads record of 30 straight games with a point.

He eclipsed the old mark of 29 games which was held by the 2013 1st round pick (3rd overall) of the Tampa Bay Lightning Jonathan Drouin who sent Ehlers this tweet congratulating him on this special achievement.

From Herd History, a twitter account that covers the Mooseheads we learn that Ehlers streak is “the longest in the QMJHL since Alexandre Radulov (2005-06 / 50 games).”

With the two assists he added in tonight’s game Ehlers has 68 points in 30 games.

How much longer will the Dashing Dane keep this record alive?  We shall see but Jets fans coast to coast to coast have to be happy with what they are seeing over in Halifax.