Note:  The Jets will practice at the IcePlex at 10:30 am after which they will depart for Washington, D.C.  They take on the Capitals on Thursday night in what should be a tough game against a streaking Washington team who have won six of their last eight games.

Standings watch: Sharks lost in regulation and the Stars won.

NHL.com:  Injuries up front could lead Jets to seek further help.  Patrick discusses what the latest round of injuries could mean to a team not terrible deep at the forward position.

ESPN:  Most common no-trade destinations (requires subscription).  Oh Canada.  Well good news Jets fans is the city of Winnipeg is not first on the list.

Illegal Curve:  Coach Maurice scrum from IcePlex (audio).  The Jets bench boss had plenty to say before he left for D.C.

Illegal Curve:  Dustin Byfgulien tells Jets coach Paul Maurice “whatever you need”.  He is usually a joker but today Dustin Byfuglien was quite serious when he told his coach that he will fill whatever position the team needs.

Illegal Curve:  Update on the status of Matt Halischuk.  Sounds like he will be back at the beginning of March.

Illegal Curve:  Mathieu Perreault is out with a significant lower body injury.  Looks like he will be done until the end of the season.  Only good news is that Stafford is day-to-day and should be at the skate tomorrow morning in Washington.

Winnipeg Free Press:  Perreault, Stafford injury updates coming.  I went back and re-watched the start to the 3rd period to see where the injury occurred because I hadn’t even noticed Stafford leave the game.  It was an unusual play that happened during a faceoff.  It didn’t look as bad as Perreault’s injury not that this is always an indication of extent of injury.  Coach Maurice will bring us up to speed on both players today following practice. 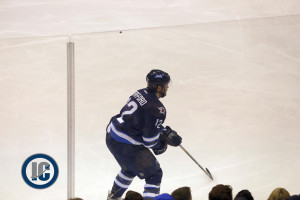 Winnipeg Free Press:  Straight shooter.  Ed catches up with new prospect Brendan Lemieux to get some insight into the Barrie Colts forward.

Winnipeg Sun:  Shootout wins are nice but Jets falling behind in important ROW category.  With the first tie breaker being ROW, Ted writes about the importance of the Jets pulling off clean victories.

Winnipeg Sun:  Did Friesen jinx Jets? Injuries piling up for Winnipeg at worst possible time.  Is it time to tar and feather the Sun columnist for his jinxing of the team?  Is this similar to when Remis ruins the shutout by tweeting about it during a game?  Either way the Jets have injuries adding up and we should have a better handle tomorrow after skate as to the extent.

Sportsnet:  30 Thoughts.  Unlike the last 30 Thoughts in which the Jets merited 11 mentions by Elliotte Friedman, in this column they are mentioned in passing with respect to interest in Curtis Glencross (point 4).

TSN:  Jets taking risk by bringing in Myers.  Yost writes about the analytics surrounding #57 and why the Jets have taken a risk with his acquisition last week.  Does taking him off a 30th place Sabres team and adding him to the Jets system mitigate these numbers?  What say you?

Yahoo Sports:  Behind that viral photo of Dustin Byfuglien flipping off Evander Kane.  Greg Wyshynski from Puck Daddy gets to the bottom of this picture (which I was unaware of until I read the article) and it is a lot more innocuous than many online would have you believe (shocking I know).  The photographer who took the picture explains the truth behind his photograph.

Illegal Curve:  A look at the Winnipeg Jets schedule down the stretch.  The Jets have 23 games remaining but against who? Will it be against easy or difficult opponents?  Against a team who is in the playoffs, in the hunt or are already thinking about next year?  We break it down for you here.

TSN 1290 Winnipeg:  Hustler & Lawless.  Hockey Insider Pierre LeBrun joins Hustler & Lawless to talk trade rumours ahead of the NHL trade deadline. LeBrun reviews the trade between the Toronto Maple Leafs and Nashville Predators. LeBrun also discusses the trade prospects for Daniel Winnik, who the Jets are rumoured to be pursuing.