After sweeping their homestand the Jets held a media availability before they took off for Edmonton. 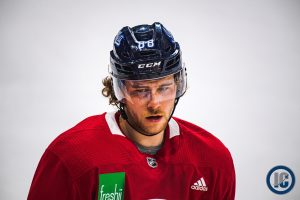 Fresh off a 4-2 win over the Coyotes last night which meant the Jets swept their three-game homestand and allowed them to leap back into a playoff spot.

The team announced this morning that they have assigned veteran forward Mark Letestu to the Moose on a conditioning assignment.

It was an optional skate today.

Andrew Copp and Jack Roslovic:  Creating a matchup issue for the opposition.  Getting Lowry back on their line.  Did Lowry look like a guy who has missed 20 games?  Did they anticipate that first shift from Lowry?  What does Lowry’s physicality do for their team?  Is it contagious?  What it means at this time of year.  Does it make the team “braver”?  Level of confidence/belief from beginning of season to now.  Where does Copp see the most growth in his game?  What type of notes does Copp keep?

Blake Wheeler and Mark Scheifele:  What does Adam Lowry’s physical presence mean?  The confidence in the team from the start of the year to the present.  Looking at the schedule and whether they believe they will be in the playoffs at the end.  The edge they’ve gained by getting healthy at this point of the season.  Getting the right contributions at the right time across the board.

Coach Maurice:  Any health concerns from last night’s game?  What Lowry does for this team.  The physical element.  Was he careful with Lowry’s minutes last night?  How will the third line impact the way the Oilers play against them?  Reflecting back to early games to start the season.  How has Jack Roslovic’s game developed in the defensive zone?  Does he notice more confidence in his group at this point?  Does he feel like they are playing to the way their roster is built?  Penalty kill.

The Jets will kick off a three-game road trip tomorrow night in Edmonton with a 8 PM CDT puck drop.  Be sure to keep it locked to illegalcurve.com for the AM Papers which go live at 7 AM CDT.