Note: The Jets held an optional practice on Tuesday before they took off for Edmonton to kick off a three-game road trip out west.  Today they will have a morning skate and while we do not expect any changes be sure to check back for the pre-game report which will have the latest news and audio on site.  Puck drop st 7 PM CDT.

Note II:  The Moose will hold another day of practice which was augmented when the Jets announced on Tuesday morning that they had assigned veteran forward Mark Letestu on a conditioning assignment.  They will hit the ice at 11 AM CDT and then they’ll take off for Milwaukee on Thursday where they will begin their six-game road trip.

Winnipeg Sun: Jets Notebook. Paul’s notes include: 1) Jets confidence might be at a season high. 2) Wheeler: ‘We really shouldn’t be where we’re at’ 3) Injuries, sked, took a toll, but now they’re rested and in ‘fair fight’ for playoff spot.

Winnipeg Free Press: ‘Better rested’ Jets feeling positive vibes in playoff hunt. (Paywall).  They certainly have the luxury of rest which is a good thing although it seems like the teams around them keep winning the games in hand they have on Winnipeg. 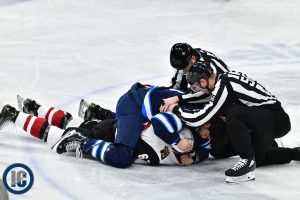 The Hockey News:  Playoffs or not, the Jets’ Connor Hellebuyck has to be the frontrunner for the Vezina Trophy.  Where would the Jets be without him?  Forget the Hart he should be in the running for the Hart Trophy (player judged most valuable to his team).

The Athletic Winnipeg:  Jets enjoying trickle-down effect: Adam Lowry provides physical spark in return.  (Paywall).  Ken wrote about the return of number 17 and what impact he had on the lineup.

TSN:  How have the Jets been able to overcome adversity all year? ‘We battle for each other’.  After it was announced Dustin Byfuglien wouldn’t be playing for Winnipeg this season, many thought the Jets’ chances of making the playoffs for a third straight year were slim. Sitting in the first wild card spot in the West as the season winds down, the team discusses how they’ve been able to rally around the adversity and set themselves up for a playoff push.