After a demoralizing loss on Friday the Jets hit the ice at the IcePlex for a practice. 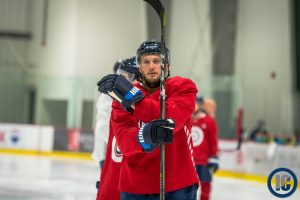 The Jets took it on the chin last night 7-1 as the Tampa Bay Lightning came in to town after playing (and losing) on Thursday night to the Minnesota Wild.

Today the Jets will practice at Noon CT to get ready for a Chicago Blackhawks team that is playing tonight in Toronto and sitting just four points back of Winnipeg after they’ve gone 7-3-0 in their last 10 games.

The Jets had already recalled Cam Schilling on Friday and this morning they announced they had also recalled Nelson Nogier from the Moose. Nogier’s recall is likely insurance for the upcoming road trip and perhaps it means Tucker Poolman is not quite ready to return.  As an aside if you are able to play D you may want to head down to Bell MTS Place to assist the Moose who play this afternoon at 2 pm.

Interestingly all skaters are present and accounted for according to Scott Billeck of the Winnipeg Sun which likely means the Nogier news is probably just insurance. As per Brian Munz of TSN 1290 Winnipeg the lines and D pairs are listed below.  You’ll notice that Scheifele and Wheeler have swapped spots.

Adam Lowry on what they have to learn from last night’s game, having the moms on the road trip and whether his mom had a bigger role with his dad being in the NHL.

Patrik Laine on the opportunity to play with Blake Wheeler as a centre, what 26 does well as a centre, having a good distributor in Wheeler and how hard it is to go from a game like Vancouver to a game like Tampa?

Coach Maurice on the recall of Nelson Nogier.  Changes to the lines and D pairings.  Niku up on the top pairing.  Any new thoughts on the game last night?  How does he make sure they are trending upwards?  Opportunity for Morrissey to play with Niku.  Excitement to have the moms on the trip.

The Jets take on the Blackhawks tomorrow night in Chicago at 6 pm.  Be sure to keep it locked to illegalcurve.com for the AM Papers which go live at 7 AM.