Note:  The Jets practiced in Winnipeg on Saturday before they left for Chicago to kick off a three game road trip. There will be no morning skate today in Chi-town for the Jets and none for the Hawks as they played (and won 6-2) last night in Toronto. The Jets will have a media availability with the coach at 3:30 pm. Be sure to check out the pre-game report.  Puck drop is at 6 pm.

Note II:  The Moose lost a tough one on Saturday afternoon 3-0 to the Rocket and will wrap up this homestand today with another matinee against Laval. It is also Peter Stoykewych bobblehead day for the first 3,000 fans.  Puck drop is at 2 pm.

Winnipeg Sun:  Gameday – Jets vs Blackhawks.  Scott opens with the question How will they respond? His five keys to the game include: 1) Changes coming. 2) PK miles better. 3) Another road miracle? 4) Don’t outshoot them? 5) Blackhawks surging. 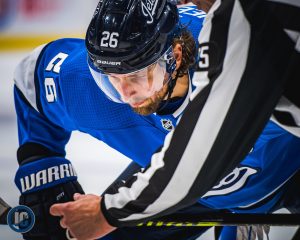 Winnipeg Sun:  Jets need bounce-back against surging Hawks after home-ice humiliation.  No question they need to get things turned around starting today.

Winnipeg Free Press:  Mom’s the word on road swing.  (Paywall).  Great to see the players take their moms on the trip.

Winnipeg Free Press: Limping Jets will shuffle centres.  (Paywall).  It will be interesting to see what this change does for the top two lines.

The Athletic Winnipeg: Amidst coaching carousel, how have Lightning’s Jon Cooper and Jets’ Paul Maurice found longevity? (Paywall).  Hard to believe that there are just three guys behind the bench with same team since the start of 2015-16 season.

Guests: Murat Ates of The Athletic Winnipeg (14:13) and Jimmy Greenfield of The Chicago Tribune (47:20)