Check out the latest from today’s practice in Winnipeg. 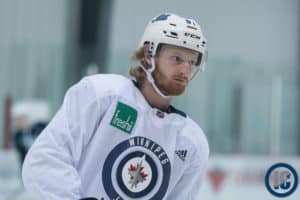 The Jets had two days off as they recharged the batteries in advance of a three-game road trip.  They will head out to Colorado to take on the Avalanche but before they do they will hit the ice at the IcePlex to practice.

Jets announced they have recalled Tucker Poolman.  Poolman has been playing some of the most confident/productive hockey since he turned pro.  And I say that without referencing his eight-game points streak which ended on Monday.

As per Jamie Thomas of Jets TV no sign of Dustin Byfuglien on the ice for practice. Jamie also provides the line rushes listed below.

Coach Maurice:  Status of Byfuglien.  Getting Tucker Poolman from the Moose.  Taking a second day off on Monday.  On Laine having success in practice.  Has Laine turned a corner?  Has he seen growth in how Laine handles adversity?  Is there a chance Nic Petan gets into a game?  Seven of nine on the road and the opportunity it presents.  Does he expect a positive response from his team after giving them the time off?

With Byfuglien not skating the coach provided this update “He’s got a new injury and he won’t make the trip.  Over the five, six day block we’ll evaluate it and hope it settles down and we get good news.”  He added it is lower-body which was suffered against the Avalanche, he wouldn’t provide a timeline and said Byfuglien won’t make the road trip.

The Jets play the Avalanche tomorrow night at 7:30 pm. Be sure to keep it locked to illegalcurve.com for the AM Papers which go live at 7 AM followed by our pre-game report at 10:30 AM.