When is not scoring an advantage for a team? 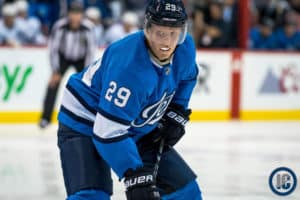 The cold streak that Patrik Laine is currently on has been well documented but just by way of quick refresher it has gone as follows:

Today Cap Friendly, which is our go to resource for all things cap related, put out this series of tweets about how his recent cold streak could impact his bonus for goals and could therefore be an advantage for the Jets as the trade deadline approaches:

(1/2) On Nov 29 #NHLJets Patrik Laine scored his 20th & 21st goal of the season, which had him in first place in the league for goals scored.

Since then Laine has scored 4 goals, and currently sits 34th in the league in goals scored.

Why is that important?

It also mean that the $1.8M the #NHLJets had earmarked as a possible bonus in Nov, can maybe be used at the trade deadline instead.

Someone asked the Cap Friendly folks about the ramifications of Laine getting hot and hitting those bonuses by the end of the season.

hey Kevin. Great question. If the amount of bonuses earned at the end of the season pushed the clubs final number above $79.5M, then any amount above the ceiling would be need to be subtracted from the Jets available cap space in 2019-20 in the form of an overage penalty.

Of course if he should have another month like November it could put the Jets into a rather sticky situation.  As of today’s date Patrik Laine is just seven goals back of being in the top 10.  So while the above makes for an interesting thought I don’t see the Jets taking on this type of risk.  Regardless of what happens it will be an exciting run up to the trade deadline next Monday.