Note:  The Jets have really been recharging the batteries the last couple days with two straight days off the ice.  Today that pattern breaks with the team scheduled to practice at 11 am out at the IcePlex before they take off for Colorado.  They will begin a three-game road trip against the Avalanche on Wednesday night.  Be sure to check back here for the Practice Report which will provide you with all the latest news and audio.

Note II:  The Moose wrapped up a very successful homestand with a 3-2 win over the Admirals yesterday afternoon in front of 7364 fans at Bell MTS Place.  The win meant the team has the most wins at home in a season since they returned in 2015 and they’ve still got 10 games left to play in the regular season in Winnipeg.  In the last 14 games in downtown Winnipeg they went (12-1-0-1) which has launched them back into playoff contention.  Today they travel to Toronto as they get ready to kick off six games on the road starting tomorrow morning when the face the Marlies at 10 am CT.

Sportsnet:  31 Thoughts.  Couple of Winnipeg mentions including 2 (Duchene), 4 (Stone), and 11 (Jets will be aggressive).

Winnipeg Free Press:  For the Jets, rest trumps everything right now.  (Paywall).  Considering how slow (both in their skating and decision making) they seemed against the Senators on Saturday the prospect of recharging the batteries is a good one for this team.  Mike also has more on the Sens/Jets chatter and Patrik Laine’s silence off the ice. 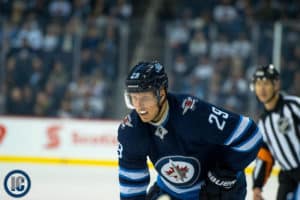 Winnipeg Sun:  Slumping Jets need a shakeup.  Paul suggests the Jets need to shake things up in order to get this group going again.  Is that extreme?  Do big moves at the trade deadline really help organizations win a Stanley Cup?  With less than a week to go before the trade deadline it will be interesting to keep watch.

TSN: Senators have their hands full with Stone, Duchene, Dzingel decisions.  According to TSN Hockey Insider Darren Dreger, the expectation is that Mark Stone is going to give the Senators his decision as early as Tuesday or as late as Wednesday which will determine how Ottawa handles Matt Duchene and Ryan Dzingel.

In this episode of Ground Control the guys discuss Winnipeg’s recent stretch, chat power play and more. Jamie welcomes CFL All-Star Andrew Harris to the podcast to discuss his love for hockey, life in the CFL and much more.