Latest from the Jets practice from IcePlex. 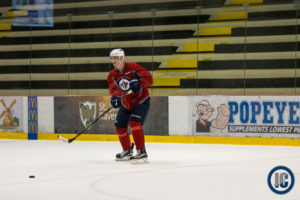 The Jets were back on the ice at IcePlex for a second straight day of practice.

Adam Lowry skated again before the main group and Tyler Myers was back on the ice according to Jamie Thomas of Jets TV.

Notes for next game:

Coach Maurice confirms that Connor Hellebuyck starts in net on Thursday in Pittsburgh.

Coach Maurice was asked about Adam Lowry and indicated that he “skated again this morning on his own.  He’ll make the trip but I would have him as possible for playing on the trip,  I wouldn’t list him as probable yet.  He’s gotta get into a full contact practice and feel strong before we do that.”

Coach Maurice:  Update on Adam Lowry.  His thought process on the Jets bottom six.  Does Brendan Lemieux’s first game get him a second one against Pittsburgh?  Is the bottom six partly reflective on the Jets opponent?  What does Enstrom’s presence mean for a young team?  Anticipate any bad blood from the hit Enstrom took last year?  Flipping the schedule from a break to seven games in nine days.  Challenge to getting the jump back in first game back.  On the benefit of the schedule.  Hellebucyk starts?