Note:  Another day of practice for the Jets as they prepare for the two-game road trip out east.  The team hits the ice at the IcePlex for practice at 11 am.  If you missed anything from yesterday’s skate be sure to check out our Winnipeg Jets Practice Report.

Note II:  The Moose will hit the ice for anther day of practice in Chicago as they prep for tomorrow’s 11 AM game against the Wolves.  The team will be at Allstate Arena at 1 pm.

Winnipeg Sun:  Hellebuyck ‘deserves credit’ for improvement.  There was a lot of conjecture when word broke this summer that he was out west working on his craft and it has certainly shown early on this season as he has combined biomechanics with his natural talent. 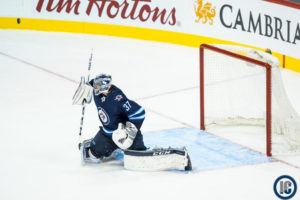 Winnipeg Free Press:  Hendricks, Lowry, Kulikov could be back in Jets lineup against Pens Thursday.  (Paywall).  The reinforcements may be on the way for the Jets road trip.  But with returns means some roster decisions are upcoming for Winnipeg.

Winnipeg Free Press:  Chiarot ready to play his role.  (Paywall).  If the Jets D core gets healthy you have to think Tucker Poolman would be better served playing top minutes in all situations for the Moose while Ben Chiarot stays up with the big club and does spot duty when necessary.

The Athletic:  Which Jets depth forwards deserve a larger, or smaller, role?  (Paywall).  A deep dive into which players should be seeing more ice time and where that time could be best utilized.

TSN 1290 Winnipeg:  Good to have a few days to recharge.  Jets forward Shawn Matthias joined the Afternoon Ride in the middle of the team’s 5-day break between games. Matthias discusses the advantages of having an amount of time to practice after 7 games played, and the challenges in switching from wing to centre as required.

TSN 1290 Winnipeg:  Puck management has been a concern for the Jets.  Ken Wiebe of the Winnipeg Sun joins Kevin Olszewski and discusses the Jets win on Friday night vs. Minnesota, and what the lineup may look like for the upcoming road trip to Pittsburgh and Columbus.