Note:  The Jets are on the ice for the final day of the five day “break” as they hit the ice for practice at 10:30 am at the IcePlex before departing to Pittsburgh.  As always the Winnipeg Jets Practice Report will keep you up-to-date with all the latest news and audio.

Note II:  The Moose play their first school game of the season this morning in Chicago as they will do battle with the Wolves at 11 am at AllState Arena.

Winnipeg Sun: Jets players love games, but Maurice is relishing the practice time.  Ted writes about how the Jets are spending this break, the team picking up the pace and with Lowry getting closer their are roster decisions coming. 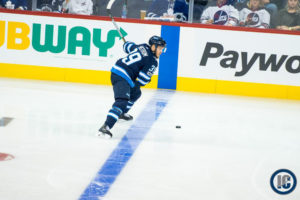 Winnipeg Sun: Enstrom bears no ill will toward Penguins after hit ended his season.  It will be interesting to see if the ill will continues, especially when you consider that the Penguins will be here on Sunday.

Winnipeg Free Press:  With nine players in the mix, Jets bottom six looks crowded.  (Paywall).  With Hendricks right there and Lowry a bit behind him it looks like the team will start to make some moves to get their roster set and send some guys to the Moose.

Sportingnews:  Jets preparing for busy upcoming schedule.  For all those Jets players who don’t like not playing games they will sure fish their wish soon enough as they team will play six games in the next ten days.

TSN 1290 Winnipeg:  Jets have decisions to make with players coming off IR.  Jets on TSN play-by-play announcer Dennis Beyak joined the Afternoon Ride to discuss the work being done by the Winnipeg Jets in practice during a 5-day gap between games, including sharpening special teams, and building confidence in the Jets’ bottom 6 in the hopes to produce scoring.