The Jets practiced this morning in anticipation of their match-up against the hottest team in the league. We cover who was and wasn’t on the ice, who will and won’t be playing tonight and audio from your Winnipeg Jets. 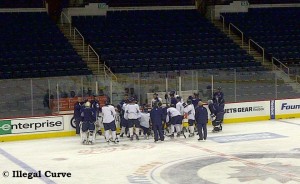 Ron Hainsey – Returning to the ice. Talks about the injury. Whether he expects to play more minutes.

Bryan Little – Talks facing off against the Wild.  Need for shots against Wild netminders.  Fast game.  Whether it is a statement game.  Building a rivalry with Wild.

Dustin Byfuglien – Talks about the injury in 1st period of game against Detroit.  Playing at home and taking advantage of it.  Discusses the Wild.   Measuring tape.  Minnesota guys playing against home state team.  Bragging rights during summer.  Throwing pucks on net.  How the Andrew Ladd birthday prank fell apart.

Chris Thorburn – Talks about the expectation for the Wild game.  Still snakebitten but expects to come out of it.  GST chant discussion.

Nik Antropov –  Had a setback in Detroit, aiming for Thursday.  Frustration with being out of lineup.

Eric Fehr – Not cleared for tonight.  Won’t go into detail about injury.

Coach Noel – Discusses availability of Miettinen.  Talks about his skills, what he will bring to the mix.  Burmistrov being day to day.  Roster decisions.  What he will do without 12 forwards.  Possibility of bringing someone from St. John’s.  Wild hockey.  What Ron Hainsey brings to the lineup.  Parallels between Jets and Wild.


GM Kevin Cheveldayoff – Talks about the Jets picking up Antti Miettinen off waivers and placing Arturs Kulda on waivers.