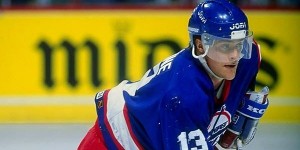 Teemu Selanne will make his much awaited return to Winnipeg this Saturday when his Anaheim Ducks take on the Winnipeg Jets.

Selanne held a conference call this afternoon to discuss a number of topics, his time in Winnipeg, the Ducks struggles this season and his upcoming return.

Below are the Winnipeg related questions from the call, scroll to the bottom to hear the call in it’s entirety.

In the relative size of your career, your time in Winnipeg was a minority of that time. Can you tell me why that time mattered so much to you?

“Obviously that was my first NHL team, the fans and the whole city make the players feel so special. It was a dream come true starting in Canada. All of the memories I have there are so awesome.”

What went through your mind when you got the phone call and got traded?

“Well, I was shocked, obviously. What happened two weeks before, the new Winnipeg owners called me on the road. There were some rumors they might trade one of us three, (Alexei) Zhamnov, Keith Tkachuk or myself. The owner called me two weeks before and said, don’t worry about those rumors, just play hockey, you’re going to be a big part of our future down in Phoenix. That’s why I didn’t really expect to be traded, but I remember that phone call. The first trade is always really hard, you almost feel as if you have failed. A couple days later I realized this will be a great new opportunity for myself, it has been a great road down here too.”

How long did  it take you to put it in perspective

“The first couple days I was totally shocked about what happened. When you start learning the business more, and how it works, and how excited the new franchise was to have me here. You want to move on as soon as possible. Coming from Finland, we don’t have the culture there that somebody could get traded. A lot of guys they play their whole career with the same team. It was weird business to realize and face that there’s no feelings, you can get traded any time, there’s no control with that. That was a big adjustment here, when you get older and know the business better, you can accept it better. But when you are young and you get traded, it’s really really tough.”

What will it be like for you coming back on Saturday?

“I’m very excited, right when the season schedule was made public I marked the date in my calendar. Even I didn’t know if I could play still this year. I knew it would be very special, to have a chance to come back and play. I don’t really know what to expect, it’s been a long time since I played there last. With all of the memories I have I’m very excited. I heard the building is rocking and the people, the fans are so excited about their team, and the whole situation. It’s going to be a very special day there, and I can’t wait.”

They booed Shane Doan when he was here

“Hopefully they won’t boo for me.”

People in Winnipeg said they gave up their tickets (for other games) so they could go to this game, it’s been a long time since you played there, there is such a strong connection between the fans and you. Why do you think that is, and do you keep in touch with anybody from Winnipeg?

“Yeah, actually I still have a lot of friends there and keep in touch with them all the time. I think pretty much every place where I played I had special relationships with the fans, and obviously Winnipeg was really really special. There’s a reason why the plates on the cars say “Friendly Manitoba” because it’s really friendly city and has unbelievable fans. I spent a great four and a half years there. When I got traded, I didn’t have a chance to say goodbye to the people and the city, the next day I was gone. It’s tough the way you get traded, everything is rushing and you’re gone the next day. That’s why I’m really looking forward to going back there. I know there are still alot of fans there. It’s funny when I go to visitor teams building, there’s a lot of Winnipeg Jets 13 jerseys still, that makes me feel really good.”

This summer when you were still a free agent, how far did talks go with the Jets about possibly returning.

“Winnipeg called my agent and asked if they could make an offer. I told Don Baizley my agent earlier, the biggest question right now is “if I can play” not “where I’m going to play”. Obviously, I have been here for a long time, I’ve been so happy for this franchise and this team. I was very honoured that they called, but it’s too late to move.”