Check out the latest from the Jets availability at Bell IcePlex. 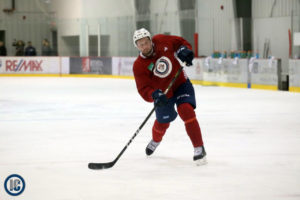 The Jets are coming off a dominating 4-1 win over the Wild last night at Bell MTS Place.  They were originally scheduled to practice at 12 noon today before they left for Minnesota ahead of game 3 which takes place in St. Paul on Sunday at 6 pm.

However, due to the potential of a Whiteout (not Jets fans although they may be heading down as well) but an actual Spring weather storm moving into the area the team has adjusted their schedule accordingly.  Instead of a practice the team will have an availability with coach Maurice at 10:15 am and then players (Adam Lowry, Josh Morrissey and Tyler Myers).

According to Mike McIntyre of the Winnipeg Free Press just a few Jets hit the ice before leaving for Minneapolis including Tucker Poolman, Matt Hendricks and Shawn Matthias.

Coach Maurice:  What do they have to be cognizant of as they head to Minnesota for game 3?  Any update on Mathieu Perreault?  On the contributions from the youth and how they’ve handled the first couple of games.  Does it surprise him at all?  What has his read been on the team’s discipline?  Is Matt Hendricks close to being a game-time decision?  Update on Enstrom?  Does he like how active his blueline has been?  Is there anything he can pinpoint that the Wild do differently at home?  On what the Jets have done along the wall.  Explaining a call from game 2.

Winnipeg Jets Morning Papers
What should the Winnipeg Whiteout party on Donald Street be called?