Note:  Just a few days ago we were talking about these Jets as a team that had never won a playoff game and now after two games they are 2-0 in this series following a dominating 4-1 win over the Wild last night at Bell MTS Place.  I’m not sure how it is possible but the crowd inside (and out) may have topped the effort we saw from fans in game 1.  With a whiteout storm warning (not a joke) heading for Minnesota the Jets have pushed ahead their plans with the team speaking at 10:15 am (coach) and 10:30 am (players).  Check it out via the Jets Playoff Practice Report.

Note II: Manitoba couldn’t keep the good times rolling in Cleveland last night as they dropped the game 3-1 to the Monsters in the second last regular season game. The good news is the Moose now know they will either finish 2nd or 3rd in the Central as the Wolves clinched 1st spot on Friday which means 1st round opponent for Manitoba will be the defending Calder Cup champion Grand Rapids Griffins. This veteran team, who held a 2-5-1-0 season series, will be a tough test for a young Moose squad.  The team has the day off today and Manitoba will finish the season on Sunday against the Wolves in Chicago.

Note III:  Three hours of Winnipeg Jets and NHL hockey talk coming your way on the Illegal Curve Hockey Show on TSN 1290 Winnipeg beginning at 9 am.  You can listen here.

Winnipeg Sun: Jets shut down Wild to take commanding 2-0 series lead.  All the Jets needed were some insurance goals as they had dominated the contest for the first 40 minutes and those came about in the 3rd as they continued to roll over their southern rivals.  Ken breaks it all down. 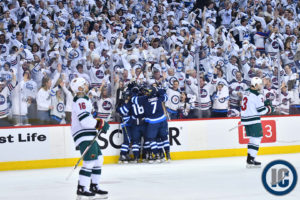 Winnipeg Sun: Dandy debut for Roslovic.  While I anticipated at the start of this year that Roslovic would most likely be getting his first pro playoff experience with the Moose there he was last night suiting up for the Jets in place of an injured Mathieu Perreault.  Not only did he jump into the veteran’s spot on the 3rd line he contributed two assists in his first game.

Winnipeg Sun:  Maurice’s cone of silence.  Most teams aren’t very forthcoming during the regular season but once the playoffs hits these become state secrets and there is almost no chance you are gonna get anything close to an answer when it comes to injuries.

Winnipeg Sun: A victory for Humboldt.  A tremendous gesture from the Jets co-owner and the captain of the Chicago Blackhawks as they help to try and bring some healing to the community in Saskatchewan.

Winnipeg Free Press:  Winnipeg out-hits, outshoots and outscores Minnesota to take 2-0 series lead.  (Paywall).  It was a dominating performance by the Jets as they took it to the Wild for almost the entire contest.  Mike recaps the game.

Winnipeg Free Press:  Dubnyk excellent last line of defence for Minnesota.  (Paywall).  The Wild goalie has been the difference between these games being 10-0 for the Jets as he has been excellent for both games despite picking up two losses.

Winnipeg Free Press:  Friday Night Whites.  Check out some of the photos from last night’s party outside Bell MTS Place.

Sportsnet:  Jets appear to be too big, too fast and too much for Wild.  The Wild have also been a good home club so it will be interesting to see what happens on the road but as of right now it does seem like a game of cat and mouse right now.

Sportsnet:  Evander Kane/Zach Bogosian trade continuing to bear fruit for Cheveldayoff, Jets.  It has certainly worked out for Winnipeg and even Evander Kane.  The Sabres, not so much.

Globe and Mail:  Jets show their confidence with 4-1 win over the Wild.  Love having Roy back in Winnipeg writing about the Jets again.  He recaps last night’s contest.

Minneapolis Star Tribune:  Jets go up 2-0 on Wild in playoff series after dominating victory.  Read about the game from the perspective of a writer who covers the Jets opposition.

Pioneer Press:  Two diehard Wild fans go behind enemy lines to watch Wild against Jets.  No question the few Wild fans in the crowd have stuck out in the Whiteout but the good nature of both fan bases have kept it clean.  I noticed at the conclusion of game 1 on Wednesday two Wild fans leaving the 300 section near my seat in the pressbox shaking hands with the Jets fans they had been sitting beside all game.

The Athletic:  Dustin Byfuglien’s presence is taking over the series.  He was clearly the 1st Star of the night last night and has made his presence felt in both games against the team from his home state of Minnesota.

The Athletic Minnesota:  Wild need more than a return home to fight back against Jets.  (Paywall).  In what is becoming a common theme Minnesota is finding itself down early in a series and having to try to dig themselves out of a deep hole.

CBC:  Actual whiteout over Minnesota could hinder Jets fans’ playoff travel plans this weekend.  Jets fans are clearly taking this Whiteout thing too seriously.  But joking aside if you are planning on heading to Minny be safe in your travels.

TSN:  Byfuglien’s physicality changed the game.  Dustin Byfuglien made an impact in Game 1 against the Wild and continued his dominant play in Game 2. Darren Dreger and Dave Poulin discuss Byfuglien’s impact and also touch on Patrik Laine scoring for the second straight game.

TSN: Wild need to find a way to get the puck, then keep it.  Bruce Boudreau’s teams are usually known for producing offence, but through two games in Winnipeg they have only managed three goals. TSN Director of Scouting Craig Button discusses Minnesota’s offensive struggles, explaining the Wild need to start by getting the puck away from the Jets.

Sportsnet:  Laine helping create a new narrative for the Winnipeg Jets.  Players and coaches explain how Patirk Laine is bringing a different atmosphere to the Winnipeg Jets and how it’s changing how people view the team.