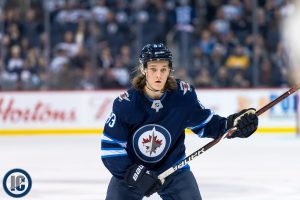 Sami Niku used to patrol the blueline over in Finland while wearing number 8.  When he came over to North America that number with the Jets was already taken by Jacob Trouba so he wore 83 with the Jets and wore his 8 with the Moose when in the AHL.  With Trouba’s trade this summer the number 8 opened up and Niku will now wear it in the NHL.

In addition to Niku’s number change two players who were recently signed by Winnipeg will wear the following numbers:

No word as to whether Anthony Bitetto asked Adam Pardy’s (2014-16) permission before selecting the number worn by the Newfoundlander who recently retired from pro hockey after winning an ECHL championship.  And did Mark Letestu have to ask Par Lindholm (2019) or Chris Thorburn (2012-2017) for their blessing to don the 22? (Not that I should have to write this but that is meant as a joke).