End of season interviews with the Winnipeg Jets. 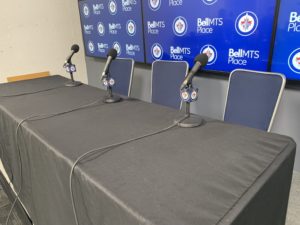 A busy morning at Bell MTS Place as a number of Jets players spoke to the media.

Nikolaj Ehlers confirmed he had a fracture in his leg.

When talking about Nikolaj Ehlers during his media availability Head Coach Paul Maurice indicated that Dustin Byfuglien also dealt with a similar type of injury during the season “If I took guys out that did it (micro fracture) we would have a fair number of players playing with that.  Dustin Byfuglien, that was his second injury that he dealt with.”.

Patrik Laine said he’s been dealing with a back issue for the past couple of seasons.  Said he had a minor groin issue in the playoffs.

Brandon Tanev confirmed he had broken a finger and had surgery on it. When Coach Maurice was discussing pain tolerance he mentioned this about Tanev’s injury “broke the top half of his finger right off to the point they couldn’t put it back together until they put a screw in it, he missed a game.”.

Josh Morrissey confirmed that he was dealing with a shoulder injury during the regular season.  Morrissey said it wouldn’t require surgery.

Laurent Brossoit indicated he was dealing with a minor hamstring issue.