Winnipeg Free Press:  Jets on mountain collision course.  If the Jets truly can be a playoff team, as they keep suggesting that can be, then they need to be able to win against quality opposition and on this road trip all opponents are .500 or better.

Winnipeg Free Press:  ‘Little’ sums up top line.  While coach Noel might not be too concerned with the Jets top line, the fans are quite worried about the lack of production.

Winnipeg Free Press:  Canadian air force flies Jets logo abroad.  Proud Peggers’ and Jets fans can be found anywhere, they are not just limited to being within the perimeter.  Our Canadian Forces show off their Jets pride from Kandahar, Alert Bay and Italy. 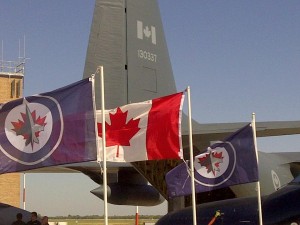 Winnipeg Sun:  No quick fix for Jets.  It is way too early to start talking about blowing up this team.  Can these guys compete hard every night and have a chance to win some games, sure.  Should people be expecting a Stanley Cup parade, we don’t think so.

Ottawa Citizen:  Playoff prospects – woe Canada.  Having a bad October is usually an indicator that the rest of the season isn’t going to get much better and that the playoffs might be already gone.  Not quite ready to throw in the towel but this start certainly isn’t a good one for the Jets and most of the other Canadian teams.

Philadelphia Daily News:  With Chris Pronger out, Matt Walker and Andreas Lilja get a chance to step up for the Flyers.   Good news for the Jets is that in addition to not having to face Pronger, the Flyers are playing tonight in Montreal so they may be a tad fatigued when facing Winnipeg.