Better get used to it. Tortorella subjected to torture. He’s not a star, but does a great job. Despite good effort, Jets come up short. Jets fire blanks against Rangers. Downed Jet Scheifele. Jets prospect Scheifele sets his sights on World Juniors. As well as New York papers on the game.

Winnipeg Free Press:  Better get used to it.   The Jets outshot the Rangers and if not for the post on Zach Bogosian’s laser from the point, the Jets might have pulled off the victory. 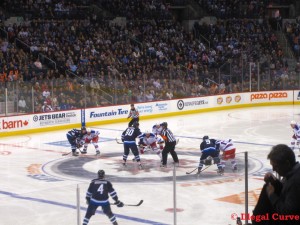 Winnipeg Free Press:  Tortorella subjected to torture.  You would think that a Rangers win and a chance to be interviewed by the IC’s Ezra Ginsburg would have lightened his mood.

Winnipeg Free Press:  He’s not a star, but does a great job.  Mark Stuart is a rock.  Steady and dependable on the point.  Doesn’t try and be too flashy.  And occasionally loves a huge hit.

TSN:  Despite good effort, Jets come up short.  When the Jets put all that pressure on the Rangers in the 3rd and failed to score to break the deadlock, you felt like something was about to give.  When the Rangers turned it back up ice after a minute or two of sustained Winnipeg pressure, the crowd sensed that this wasn’t going to be good for business.

Winnipeg Sun:  Jets fire blanks against Rangers.  It is too bad goals against your own team don’t count for you as it would help the Jets production numbers.  Nothing Bogosian could have done on that play but this Jets team needs to find the right formula for scoring some goals against the opposition.

Winnipeg Sun: Rangers rob win and other Jets snapshots.  Not sure it was a demotion on Wellwood so much as coach Noel looking to try and get Evander Kane going.  Other topics include Chris Mason having a great attitude, Claude Noel’s hate-on for Shaw, Burmistrov electrifying the crowd and more.

Barrie Examiner:  Downed Jet Scheifele.   This kid has a fantastic attitude and took his demotion to Barrie in stride.  Expect him to learn a lot from coach Hawerchuk this season and to bring his same work ethic next year.

TSN:  Jets prospect Scheifele sets his sights on World Juniors.  Jets fans, who probably won’t be watching too many Barrie Colts games, will relish the opportunity to watch the franchise’s future star playing on this stage in Alberta.

New York Time:  Rangers not sharp, but win in Winnipeg.  The Rangers stars were hardly noticeable.  I think I saw a flash of Gaborik during the 2nd period for 1 shift and couldn’t tell if Brad Richards was on the ice.  The Blueshirts captain Ryan Callahan however played a great game as did goalie Martin Biron.

New York Daily News:  Rangers use power play to beat Jets.  The Rangers had 5 pp opportunities to the Jets 1, and managed to score twice.

Newsday:  Puck-happy Winnipeg wants more from Jets.  Fans are over the “let’s just be happy we have an NHL team back” stage.  These are pretty sophisticated fans who expect an effort from this team, that if not put forth, will result in boo’ing from the home crowd.