If Chevy could turn back time, he would. Scheifele simply not ready, sent back. Jets roster ok, says Chevy. Jets winger McArdle itching to pitch in. Rookie coach Vincent flying high with Jets. Tempers flare off the ice in Jets-Shaw spat. Reading the opposition news including Lundqvist likely to sit and more. Note: Happy Birthday to IC editor Richy P.

Winnipeg Free Press:  If Chevy could turn back time, he would. Fans better enjoy tonight’s game against the Rangers as it will be the last home action for some time.  The team doesn’t play in Winnipeg until November 10th (against Panthers) and only plays 4 times total at home in November.

Winnipeg Free Press:  Scheifele simply not ready, sent back.  Coach Noel and GM Cheveldayoff clearly have a lot of respect for the Jets 1st round draft choice and felt this is the best move for everyone involved.  Here is the audio from yesterday in which the Jets coach and GM discuss the move.

Winnipeg Sun:  Jets winger itching to pitch in.  Kenndal McArdle looked like a rockstar after the Jets practice on Sunday with the media scrum surrounding him.  He had an enthusiastic practice and should bring some good energy for the team. 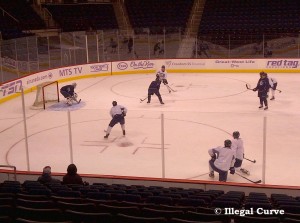 Montreal Gazette:  Rookie coach Vincent flying high with Jets.  If he continues to help the Jets power play improve (up to 23rd from 30th last week) then he will continue to get noticed.  But for now he needs to focus on improving the team he is under contract with.

Globe and Mail:  Tempers flare off the ice in Jets-Shaw spat.  Coach Noel wasn’t happy at yesterday’s media scrum.  He asked if “anyone knows anyone from Shaw”.  Clearly he is not happy  “….and they’re not taking any blame.  Not their fault”.

Globe and Mail:  Jets send Scheifele back to OHL.  At least they didn’t send him back empty handed.  Aside from the valuable experience he gained from playing all the pre-season plus 7 regular season games, he pocketed $71,000.00 from his NHL contract.  Might make living a little easier this season.

North Jersey News:  Henrik Lundqvist likely to sit.  Another one of those situations where it is bad for fans as they miss an opportunity to watch one of the premier goalies in the NHL but it is much better for fans if they want to see the Jets beat the Rangers.

New York Post:  Missed chance irks Rangers’ Gaborik.  You would think that New York went 0-3 so far on this Western Canadian road trip they way the players are talking.  They are 2-1 with victories over the Flames and Canucks.    Even though they currently sit 5th in the Atlantic Division, they are just 3 points back of 2nd (Flyers) with a game in hand.

Newsday:  Rangers look to rebound against Jets.  This is a surly Rangers crew that Winnipeg is going to have the pleasure of hosting tonight.

Wall Street Journal:  Rangers make first trip to Winnipeg in fifteen years.  If you thought it has been a long time since the Rangers came to the Peg’, it has been even longer since they last won here.