Note:  Today is a full day of sports in Winnipeg.  Bombers play Alouettes at 2pm.  Then the Jets take on the Hurricanes at 6pm.  As an added bonus, Richard and Dave will be taking to the mics from the Exchange Restaurant at the MTS Centre from 2pm-3pm, to give you wall to wall coverage of sports all day on TSN Radio 1290.  We will also have player audio following both Jets and Hurricanes practice up on site.

Winnipeg Free Press:  No quick takeoff for winger Fehr.  From what we heard from coach Noel yesterday, it doesn’t sound like he will be ready anytime soon.  He did skate with team at practice but was wearing red jersey (see below). 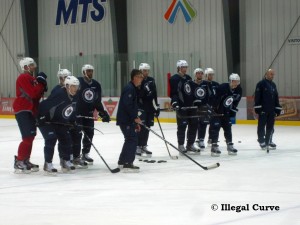 Winnipeg Free Press:  No anchovies, Johnny.  If he cut out the cross ice passes, Jets fans would breathe a lot easier when #29 is on the ice.

Winnipeg Free Press:  Goals would be useful.  The Jets top line does need to continue firing pucks towards the net.  As Blake Wheeler said yesterday, he knows his line has to start performing in order for this team to have any hope of success.

Winnipeg Free Press:  Puck in face could keep Ladd out tonight.  Ladd tweeted a picture of himself yesterday and he looked a lot worse for wear after taking a puck to the face in Ottawa.

TSN:  Jets GM Cheveldayoff preaching patience.  It is Canada.  He doesn’t have just 15,004 fans at every game, he has 15,004 GM’s as well.  Everyone knows how to “fix” what appears to be the Jets broken ship.  Reality is, it will just take some time.

Winnipeg Sun:  The ultimate doubleheader.  IC’s Ezra and Drew will be attending both the Bombers and Jets game today.  A nice bonus for sports fans in this city.  To be able to support both teams.  Interestingly, both teams are desperate for a “W’.

Winnipeg Sun:  Jets second-guessing themselves.  Some of these guys are definitely holding their sticks a bit tighter as they try and get the Jets offence rolling.