Note:  Tune into the Illegal Curve Hockey Show now on spring hours (from 9 am until noon).  Plenty to discuss as we catch up on all the latest Stanley Cup Playoff news and take a final look at the Winnipeg Jets 2013/14 season.  Guests:  Joshua Cooper (The Tennessean), Aaron Portzline (Columbus Dispatch), Pat Hickey (Montreal Gazette) and Tom Lynn (Veritas Hockey).

The Hockey News:  Criticism hurled at Kane, Byfuglien, Subban & others is about race more than character.  This is a tough one.  Read twitter where you can see numerous examples of ignorance and racism (might be time for a campaign “think before you tweet”) that spews forth whenever these players are in the news.  While you cannot deny that same exists, I am also not sure it is fair to suggest that the majority of the criticism (not via social media) comes from prejudice.  Perhaps it is, but the experience I have had with fans in this city suggests this is not the case.  What do you think?


Winnipeg Free Press:  The art of hockey analytics.  Ed gives you some insight into the world of stats.

Winnipeg Sun:  Petan leads Portland into WHL Western final.  Fans have to be excited to see the continued development of the Jets 2nd round selection in the 2013 draft. 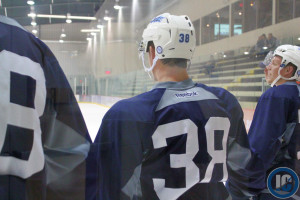 The Telegram:  IceCaps shut out Sharks 6-0.  Solid return for Michael Hutchinson who got his first start since returning from his stint with the Jets.  Last game of the regular season goes this evening as the final tune up before the playoffs.

Worchester Telegram:  IceCaps take advantage of listless Worcester Sharks.  A view of the game from the other side as Worchester ends their season out of the playoffs and on a losing note.