Jets’ win the first of its kind. Shanahan calling Kris Letang for hit on Burmistrov. Tough call to make on rookie – Ducky. Taking flight early uplifting for Winnipeg. Burmistrov at centre of it all from the wing. Asham was a huge Jets fan. Jets to play Bruins in exhibition game in Saskatchewan next year. Shaw viewers miss start of Jets game. Scheifele trying to find a way. Opponents solving the riddle of Jets’ top pick Scheifele.

NBC Sports:  Shanahan calling Kris Letang for hit on Burmistrov.  He clearly hit him when he was in a vulnerable position but the puck was in the zone and Burmistrov turned his back to Letang.  Won’t be cut and dry. What do you guys think? Should Letang be suspended?

Winnipeg Free Press:  Jets’ win the first of its kind.   Burmistrov was lights out the entire night.  Not only was his puck possession making him look like Wings star Pavel Datsyuk, he was physical and that impressed coach Claude Noel who said as much in the post-game press conference.

Winnipeg Free Press:  Noel’s Hitchcockian ways scare them good.  The Jets mini road trip to Southern Ontario this week should be a good barometer of coach Noel’s influence.  Will the team continue to do the small things well.  Or do they revert back to their inconsistent play?

Winnipeg Free Press:  Tough call to make on rookie – Ducky.  The Jets should not repeat the mistakes that were made in the past, by rushing a young player to the NHL before he has properly developed.

Winnipeg Free Press:  Asham back in spotlight for a good reason.  Asham wasn’t afraid to discuss the “incident” and took full responsibility for his actions.  Don’t expect a repeat of those actions again from this Manitoban.

Pittsburgh Post-Gazette:  Taking flight early uplifting for Winnipeg.  Unlike against the Habs or Yotes, the Jets were able to keep the crowd in the game by seizing the early momentum when they tied the franchise record, scoring 8 seconds into the 1st period.

Pittsburgh Tribune:  Winnipeg in hockey heaven.  You don’t have to like hockey, to enjoy the fact that the Jets are putting Winnipeg back on the map.  Dejan Kovacevic does a nice job describing to his readers back in Pittsburgh the importance of the Jets to this city. 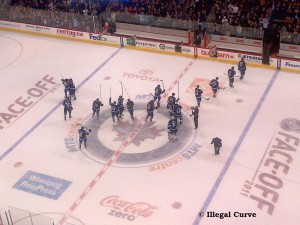 StarPhoenix:  Jets to land in city.  Wonder if the Jets GM had any influence in setting up this exhibition game with the 2011 Stanley Cup champs in his home province.

Winnipeg Sun:  Asham was a huge Jets fan.  Interesting to note that Arron Asham is the first Manitoba born player to play against the Jets in a regular season game.

Winnipeg Sun:  Jets snapshots – Burmistrov at centre of it all from the wing.  Kirk Penton hits you with a lot of Jets news from yesterday’s game.

Globe and Mail:  Jets edge Penguins for first win.  The Jets might have to start declining power play opportunities if they keep this up.  I will say that the PP in the 1st period was a lot better than they had displayed prior to last night’s game.

Pittsburgh Tribune:  Weary-looking Penguins fall to Winnipeg.  If you are looking to wow your friends with your hockey knowledge, last night’s 1st goal of the game by Kyle Wellwood 8 seconds into the contest was the quickest ever scored against the Penguins.

Portage Daily Graphic:  Asham well-received in NHL homecoming.  When Ezzy spoke with him he seemed very happy to have the opportunity to play in front of his family and friends although clearly he would have preferred a different result.

Winnipeg Sun:  Shaw viewers miss start of Jets game.  We were getting a lot of @tweets by viewers who were unable to see the 1st period of action.  The problem got rectified but Shaw might want to ensure that this doesn’t happen again.

Winnipeg Sun:  Scheifele trying to find a way.  While some people might say he did nothing last night, it is difficult to measure considering  how little playing time he actually had.  I’m not even sure he played a shift in the 3rd period.

Globe and Mail:  Opponents solving the riddle of Jets’ top pick Scheifele.  The best bet is to allow him to continue his development under coach Hawerchuk in Barrie for another season.  What value does he gain by playing on the 3rd line and missing the entire 3rd period of the game?