Captain says squad must shape up fast. Coach cheering no longer. Asham finally plays on home ice. No wins, no points, no wonder. Distress call for Jets. Four injured players did not make trip to Winnipeg.

Winnipeg Free Press:  Captain says squad must shape up fast.  This notion that the team/players will get a free pass may be expressed by the minority of fans.  The vast majority, however, while not expecting Stanley Cup results, expect this team to compete a lot better than they have the past 3 games.

Winnipeg Free Press:  Coach cheering no longer.  He summed it up when he used the word “perplexed” to describe the conundrum that is his team right now.

Pittsburgh Post-Gazette:  Asham finally plays on home ice.  After this past weekend’s controversy, the Manitoba product is excited to play professionally for the first time in his home province.

Globe and Mail:  No wins, no points, no wonder.  At his Sunday press conference Coach Noel didn’t seem to have an answer as to why his team is under performing.  When asked if the players were buying into this notion of a “free year” he stated that for himself and his staff there isn’t any such thing as a “free year”.  Wheeler, Ladd and Pavelec worked hard in the optional practice yesterday and Coach Noel has to hope that this hard work can pay off against the Penguins. 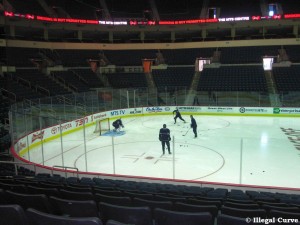 Pittsburgh Post-Gazette:  Small thoughts at large.  I remember having a ticket to a Penguins game and thinking how cool it would be to see Mario Lemieux playing at the Winnipeg Arena, only to find out that he wasn’t making the trip due to back issues.

Winnipeg Sun:  Distress call for Jets.  Most fans who have taken our poll don’t expect the Jets to get their first win against the Penguins.  However, without Crosby and Malkin, if the Jets can find some scoring they have as good a shot as they are going to against a tough Pittsburgh team.

Pittsburgh Post-Gazette:  Four injured players did not make trip to Winnipeg.  I am sure that fans of NHL hockey are upset that Crosby and Malkin won’t be making an appearance tonight.  But I am also sure Jets fans will be happy because it gives the winless Jets a chance to beat a very dangerous Penguins team.