TSN:  Jets return home still looking for first win.  No question that this team needs to start taking more shots on net.  Eliminate the cute passes and put shoot some rubber at the goalie.

Winnipeg Free Press:  Penalty shot typical of season thus far.  I think that people need to calm down and come back down to earth.  This team wasn’t expected to compete for the Stanley Cup this season.  We shouldn’t be shocked that they haven’t gone 3-0 so far.

Winnipeg Free Press:  Defence still coming up short.  Fans have to wonder about sending down someone like Postma in favour of anyone who has played thus far.  With the exception of Ron Hainsey and Tobias Enstrom(both +1 last night), the play of the Jets defence has been pretty poor.

Winnipeg Free Press:  Jet set in Arizona.  What a party.  Only thing that ruined the festivities was the play of the Jets 2.0.

NBC Sports:  Phoenix beats Winnipeg for Jets supremacy.  No question which team won this round.  But with all due respect to the 80-85% of the arena made up by Coyotes fans, the true test of the Coyotes fandom will be determined by attendance for the next 5 or 6 Coyotes games at Jobing.com Arena.  At least Howler, the Coyotes mascot, likes our fans. 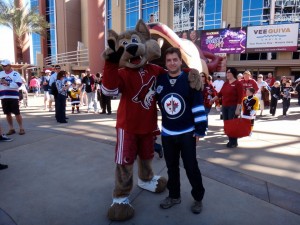 Winnipeg Free Press:  Has Buff right stuff?  While watching the game tonight I couldn’t help but think what an asset the burly Byfuglien could be to the Jets forward corps.  The 3 or 4 times he carried the puck in deep, he gave the Coyotes players a lot to deal with and created opportunities for the Jets forwards.

Winnipeg Free Press:  Rapidly losing altitude.  If the Jets don’t figure out how to break this cycle, when they play this type of game again against the Pittsburgh Penguins, the score might be 10-1.

Globe and Mail:  Coyotes pick apart desperate Jets.  There weren’t many positives to focus on from last night’s game.  The power play continues to be dreadful, the team can’t win faceoffs and the passing is less than crisp.

Winnipeg Sun:  Nightmare start to season.  The Kane interference call was a real back breaker.  It was careless and selfish on his part.  While it came with 9 minutes left in the 3rd, had he not taken the penalty and Thorburn’s empty net goal stood, the Jets would have been just down 2 with some time to go.

Winnipeg Sun:  Coyotes took the air out early.  Similar to what happened at the Jets home opener when Montreal scored early in the game, the Yotes got a quick goal from Daymond Langkow to silence the partly pro Winnipeg crowd.

Arizona Republic:  Coyotes coach Dave Tippett gives kudos to fans at home opener.  The Jets fans deserve some high praise as well.  If reports are accurate and they were outnumbered approximately 7-1, they did quite the job making their voices heard.

Winnipeg Sun:  Jets fans take over Phoenix.  It was rather cool to hear the Canadian anthem being sung, and hearing the Jets fans stressing the ‘True North’ line as they do at the MTS Centre.

Arizona Republic:  Winnipeg Jets fans travel to Glendale.  Glad to hear that there were not any major incidents between fans of both teams.