Winnipeg Free Press:  Top line not performing.  With the season only consisting of a two game sample, it is hard to start to panic.  Do you think it is time to break up the top line?

Winnipeg Free Press:  Rookie Jets’ descent has been steep, almost perpendicular.  Is anyone truly surprised by this?  He had played exceptional in the pre-season, allowing fans to breathe a sigh of  relief that the Jets 1st round pick wasn’t a dud.  He clearly though still requires some seasoning and he will get just that when he returns to Dale Hawerchuk and the Barrie Colts.

Globe and Mail:  Its the ‘Old Jets against the new Jets’.  While the rivalry is good fun, I hope that fans from both sides that will be at the Jobing.com Arena will act with class while enjoying the hockey game. 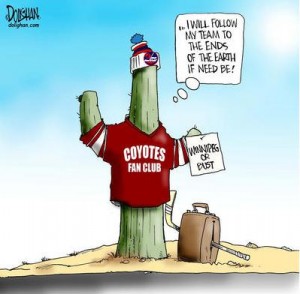 Winnipeg Free Press:  Coyotes no longer howling.  So much for Winnipeg not being able to handle itself in the NHL.  Players are getting that this team making money means they are paying less into the league coffers in the form of escrow.

Winnipeg Free Press:  Every game’s a circus in the early going.  The Jets really won’t play a “normal” game for awhile.  After tonight’s tilt against the Jets 1.0, they play the Penguins with Sid the Kid possibly in lineup.  Then it is off on another mini road trip to play Leafs and Sens.  Even the Saturday night game against Carolina will be nuts as it is the first HNIC Saturday night game for the re-born Jets.  Maybe the Rangers game on the 24th of October in Winnipeg will be when things calm down.

Winnipeg Free Press:  Hey Phoenix, nice to see ya, wouldn’t want to be ya.  The Coyotes fans are in the unenviable position that Jets fans should understand all too well.  Fans want the team to stay but without an owner in sight willing to put up with the considerable financial losses associated with the team remaining in Glendale.

Arizona Republic:  Coyotes to face Jets and fans.  Little salt in the wounds giving out a 15th anniversary t-shirt.  You would think that a team on a budget would cut out giveaways as a waste of money.

Globe and Mail:  Shane Doan expects surreal moment in clash with Jets.  It was easy to blame Doan as being anti-Winnipeg but one can understand his reluctance to uproot his family.  Of course as an unrestricted free agent at the end of this season he could be traded.  Ultimate in irony – Jets 2.0 making a playoff push, trading for the 35 year old captain of the Coyotes.

Winnipeg Sun:  Doan praises Jets return.  Unfortunately this effusive praise by the Coyotes captain might be too little too late.  His bad fortune is that the two main targets for Winnipeg fans ire, Eric Belanger and Ilya Bryzgalov have abandoned ship.  Meaning he is the guy most likely to be on the receiving end of Jets fans wrath.

Winnipeg Sun:  Jets making power play progress says Byfuglien.  The team is 0 for 9 in power play opportunities.  I guess if you are an optimist you have to figure that eventually you will score a pp goal.

“I’m envious of Winnipeg in that aspect for sure,” Aucoin said. (bolding my own).

Winnipeg Sun:  Jets new rivalry no mirage.  I said before the season began that the Coyotes had the potential to be the best future rivals for the Jets 2.0.  But as Paul Friesen points out there might not be time for this rivalry to develop.

Winnipeg Sun:  Fans flock to desert for battle in desert.  For the price some paid to get into the Jets home opener, some fans took the opportunity to buy a flight, game tickets and hotel rooms to see the Jets 2.0 take on the Jets 1.0.  You can expect to see Allyk returning to Phoenix to see this historic game.