Winnipeg Free Press:  .  Tune into Illegal Curve for our handy line-up cards as it sounds like you might need it for tomorrow night’s game against the Coyotes.

Winnipeg Free Press:  Jets’ 2.0 rough start.  It would be somewhat appropriate if the Jets 2.0 first NHL victory comes at the expense of the former Jets 1.0.  Having said that, the new Jets will have to pick up their level of play if they expect to win at Jobing.com arena.

Winnipeg Free Press:  Hawks vet remembers playing in final Jets 1.0 game.  While Winnipeg might not be the most pleasant place to visit in December, most players are happy that the team is now contributing to the league coffers.  Meaning, of course, that the players aren’t helping to prop up the franchise.

Winnipeg Free Press:  Hawks a darn good role model.  While you should appreciate what the Hawks have done, let’s not get too effusive in our praise of the organization.  They have 1 Stanley Cup in the last 40 years.  If the Jets want to model themselves after an organization I’d suggest they head a little father down the I-94 highway, to the city of Detroit.

Globe and Mail:  Blackhawks’ comeback stings Jets.  I thought that Pavelec played better than a 6, but perhaps that is what Coach Noel thinks his team needs for motivation.  Don’t expect any kid glove treatment from the Jets bench boss.

Winnipeg Sun:  Jets have work to do.  That was quite the homer lack of stoppage at the end of the game.  I’m not suggesting that the Jets could have tied it with 1.6 seconds on the clock, but clearly Emery had the puck covered and the ref had blown the whistle.

Winnipeg Free Press:  Old home night for some Jets.    For Jets GM Cheveldayoff, visiting Chicago gives him an opportunity to visit his family who remained behind when he left for his new job with Winnipeg.

Winnipeg Sun:  Jets GM sees similarities in Chicago.  The only similarity Jets fans are interested in will be a Stanley Cup banner hanging from the rafters of the MTS Center.  Of course, they should probably set their sights a tad lower, given the history of THIS franchise.  First round win?  First playoff win?  Make the playoffs?

NHL.com:  Jets chairman lauds fans on ‘NHL hour’.  David Thomson and Mark Chipman are clearly dedicated to building something great here on the Prairies, but they view this as a long term goal.  This is not something that will happen overnight.  In this age of instant gratification, will fans be able to hold back on their impatience if the process takes a few years?

The Telegram:  A game unlike any other, but like every other.  Just like the Jets did on Sunday, the team’s AHL affiliate plays their home opener tonight and the atmosphere in the Mile One Centre is going to be electric. 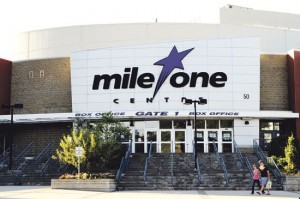 The Telegram:  Tip your cap.  Ironic that the Manitoba Moose knocked out the Leafs to end AHL hockey in St. John’s six years ago.

CBC:  IceCaps set to play first St. John’s game.  Just like Winnipeg, St. John’s will be playing in front of a full building each night.