Jets sign 1st round pick Mark Scheifele to entry level contract. Ondrej Pavelec’s interesting perspective. Jets ready to take off. Decision on Scheifele looming. Bogosian willing to battle it out on front lines. Postma/Gregoire go with floe. Does the East suit the Jets? Puck ready to drop on NHL’s season of uncertainty.

Winnipeg Free Press:  Jets sign Scheifele to entry level contract.  TSN just released the terms which would see the Jets 1st round pick earn $925,000, plus $700,000 in average bonuses, with cap hit of $1.625 million per season.

Winnipeg Free Press:  So much more to life than stopping pucks.  One has to appreciate the Jets netminder’s outlook on life after last season’s health scare.  Now that his health concerns are behind him, he can be the workhorse the Jets are going to need him to be.

Winnipeg Free Press:  Postma, Gregoire go with the floe.  Getting some seasoning in the AHL isn’t the end of your career, and it appears that GM Cheveldayoff has plans for these guys.

NHL.com:  Jets ready to take off for NHL return.  NHL.com gives its readers an assessment of the Jets team in their 30 in 15 series.

National Post:  The East suits the Jets just fine.  Some Down Goes Brown humour as they breakdown the Eastern Conference.

Winnipeg Sun:  Decision on Scheifele looming.  This kid is just having a great time with this experience and seems like he will handle any challenge (either Jr. or NHL) with that same gusto.

Winnipeg Sun:  Jets’ Bogosian willing to battle it out on front lines.  I was one of those doing a double-take in the press box.  I leaned over to one of the guys and said “Is that Bogosian as a forward?”.  Gotta like the Jets versatility.  Hopefully he improves his defensive play under assistant coach Charlie Huddy. 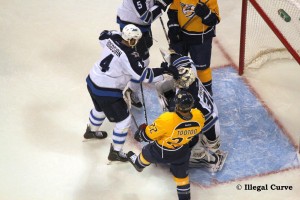 McGill Daily:  It’s hockey year in Canada.  With the season about to begin, will Winnipeg remain the darlings of Canada, or will the city become another rival to hate?

Globe and Mail:  Puck ready to drop on NHL’s season of uncertainty.  The NHL might have some black clouds hanging over it, but the citizens of the Province of Manitoba are going to be partying all season long.  I cannot overstate how electric the atmosphere is at the MTS Centre.  We are going to be making our season predictions today and we want you to participate as well.