TSN:  30 teams in 30 days – Winnipeg Jets.  The question TSN asks and is one we’ve posed before is this:  How many wins is a hardcore fan base worth?

Winnipeg Free Press:  Camaraderie counts, too.  We will see how true these relationships are when the season begins.  It is easy to be jovial before the strain of a season begins.

Winnipeg Sun:  Health not a concern – Byfuglien.  The Jets are going to need Big Buff firing on all cylinders when the season begins in one week’s time.

Winnipeg Sun:  Jets dealing in subtraction.  Will they sign Scheifele before the 4pm Tuesday deadline?  Will a young prospect like Postma be sent back down?  We will know very soon. 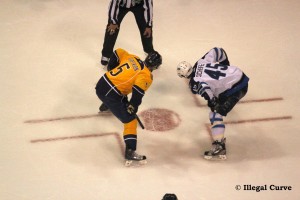 Winnipeg Sun:  Reality of Jets return slowly sinking in for McVie.  The Jets coach in the glory days of the AVCO Cup and the man who led the Jets as they transitioned into the NHL.  He is clearly excited for the team to be back in the Peg’.

Winnipeg Sun:  Meech awaits fate.  Meech is used to this yo-yo existence as he spent time bouncing back and forth between the Wings and the Grand Rapids Griffons.  Even when called up by the Wings he wasn’t used for more than 50 games in a season and spent all of last season with the Griffons.  He had a pretty solid camp, so you can probably expect Meech to be here when the season starts.

NBC Sports:  Winnipeg Jets face two tough road swings and two huge home opportunities.  Biggest thing this Jets team can do is avoid any major slumps, which is what killed them as the Thrashers last season.  The key to the Jets season might be the 13 games they will play at the MTS Centre in December.  A serious winning % will go a long way to making this season a positive one.

Coloradoan:  Eagles open camp, prepare for ECHL.  This team had a lot of success in the Central Hockey League but will a move to the East Coast Hockey League put an end to that success?