Winnipeg Free Press:  Scheifele might get his wish; agent, Jets talking contract.  Regardless of what happens with the Jets 1st pick from the 2011 Entry Draft, he has impressed everyone with his maturity, poise and skill and will be a major asset to this team.

Winnipeg Free Press:  Counting on Kane to light the lamp.  The big, fast Jets winger is going to have to have a career year if the Jets want to make playoff noise this season.

Globe and Mail:  Southeast Division.  David Shoalts gives readers his assessment of the Jets and their competition in the Southeast division.

TSN:  Decision on Scheifele making team not yet made.  Looks like tonight’s game against the Predators will be the biggest game of this young prospect’s life.

CBC:  Some Jets fans shut out by invalid tickets.  Some of the sketchiness online makes me wonder who would send someone money (well above face value) for tickets that could or couldn’t be fake or pre-sold to someone else (as was the case in the above instance).  I remember seeing people buying tickets outside a Detroit Lions game, buying “email paper tickets” and thinking “are you crazy”.  The inevitable confrontation after they were denied entry to Ford Field made for some awkward moments.

CBC:  IceCaps lose in exhibition debut.  This team is even more unfamiliar with each other than the Jets were so this isn’t a big deal, altghough winning the first game would have been a nice touch.

The Telegram:  Making a case to stay.  Nice to see guys with the passion to play.

The Barrie Examiner:  Team hopes Telegin can dazzle.  The Jets hope that a season under Coach Hawerchuk will give this Russian ace some much needed seasoning. 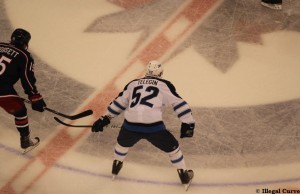 Toronto Sun:  It would be ‘awesome’ if Wings and Leafs were in same division.  To lose the Wings in the West would be to lose a very big draw and most Western teams would likely be very happy to see Nashville or Columbus head East instead of Detroit.