Winnipeg Sun:  Can Jets fans forgive Bettman?  I would like to think that Jets fans will be staid when the Commish is shown on the jumbotron but I have a sneaking suspicion that 15 years of pent up emotion might be unleashed.

Winnipeg Free Press:  Byfuglien to miss pre-season finale.  It is a shame but considering the Jets have 9 days before the home opener, it should be enough time for these minor injuries to heal up. 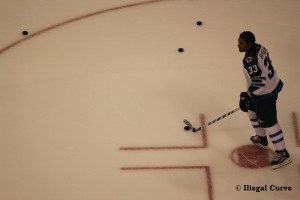 CBC:  Extra flight time won’t ground these Jets.  Young Jets should be able to handle the rigours of travel, combined with the fact that they are only 10th most traveled team this season.

NHL.com:  Fans honour Jets’ new owners during anthem.  I’ve seen fans discussing this for a number of weeks, if not months as a way to honour True North.  I like it.  It doesn’t take away from the anthem and it puts a Winnipeg spin on things.

Winnipeg Sun:  Bachman & Turner headline NHL kickoff party.  Going to the past to celebrate the future.

Winnipeg Free Press:  Free Press, Jets partnership will provide top-flight coverage.  Another deal for the organization that wouldn’t be able to make it work in Winnipeg, or so the experts predicted.