Winnipeg Free Press:  Scheifele shines again.  With the Jets roster expected to be cut from 53 to 30, will the Jets 1st round pick have made enough noise to avoid being sent to Barrie?

Winnipeg Free Press:  Lure of NHL irresistible.  Clearly David Aebischer is serious as he has said repeatedly to anyone who will listen that he is prepared to do whatever it takes to get back to the NHL.

Winnipeg Free Press:  No fixed address no fun for Festerling.  It must be somewhat disconcerting to have had 9 different addresses over the past four seasons.

Telegraph Journal:  Cormier not cooling his Jets.  Having had a taste of the NHL, he is doing his best to show the Jets brass that he has what it takes to play in the NHL. 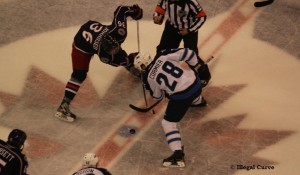 The Telegram:  Hockeyville warms up home ice.  Good for the Jets for making a great 1st impression.

TSN:  Jets down Senators at a full house in St. John’s.  That was a good way to begin a long relationship with Atlantic Canada.

Winnipeg Sun:  Scheifele stepping up.  He is looking very good and making the Jets brain trust look like they made the right choice in the 2011 Entry Draft.

CBC:  Bodie wants to avoid St. John’s in the future.  He helped his case after a fight against NHL veteran pugilist Chris Neil and scoring the game winner.

Winnipeg Sun:  Teemu can’t wait to play in ‘Peg.  After the home opener this has to be the most anticipated game on the Jets schedule.  The crowd is going to go ABSOLUTELY nuts when the Finnish Flash enters the arena.

Kamloops This Week:  Jets highlight the ‘new’ NHL season.  There is going to be a lot of new this season and people in Winnipeg, and around the league are looking forward to this.